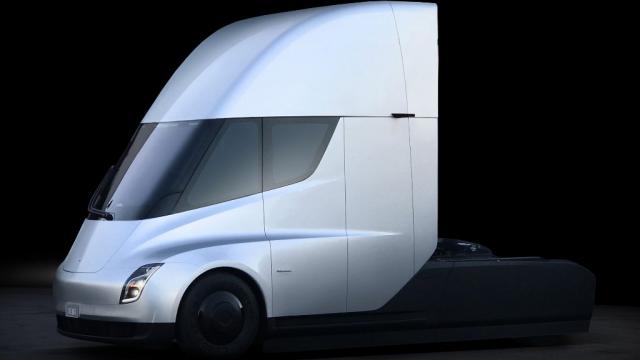 Tesla revealed an all-new version of its Roadster sports car that can go from a stop to 60 miles an hour in 1.9 seconds, a figure that would make it the fastest-accelerating production car ever.

That was after Tesla unveiled its new semi-truck, which CEO Elon Musk said can go zero-to-60 in five seconds with an empty trailer. That's a figure usually associated with luxury sedans, not big trucks.

With a full load, the truck can still reach that speed in 20 seconds, according to Musk, much faster than any diesel-powered truck.

Only after talking about the truck's speed did Musk mention its range. It can go up to 500 miles with a full load at highway speeds, he said.

That's more than twice the distance of most trucking routes, Musk claimed, allowing a driver to make a round trip before recharging. A 300-mile version will also be available.

But truck drivers may still have some reservations.

Regardless of whether Musk is right about the typical length of trucking routes, 500 miles is still far less than diesel trucks can travel. And diesel fuel tanks can be refilled much more quickly than batteries can be recharged

The Roadster will have a range of 620 miles and a top speed of over 250 miles an hour. That would put it, at least, near the 261 mile-an-hour top speed of the $3 million Bugatti Chiron.

The Roadster will also be able to run a quarter mile from stop in 8.8 seconds, Tesla said. For comparison, the 840-horsepower Dodge Challenger Demon, a single-seat car engineered specifically for drag racing, manages it in just under 10 seconds.

Unlike the previous version of the Roadster, Tesla's first model which went out of production in 2012, this car will have four seats.

It is not clear yet what the final price of the truck will be.

The semi's drive systems are guaranteed to last for 1 million miles, Tesla said. Thanks to the low cost of running it, buyers should make back the additional cost in just two years, Tesla claimed.

Inside the Tesla semi's cab, the driver is seated in the center -- rather than on the left or right -- with a large touch screen on each side.

Without a large diesel engine, the driver will have a roomier cab than in other trucks, Tesla said. The truck will also have an enhanced version of Tesla's semi-autonomous driving system, AutoPilot.