Tesla has soared 50% since announcing its stock split — last week 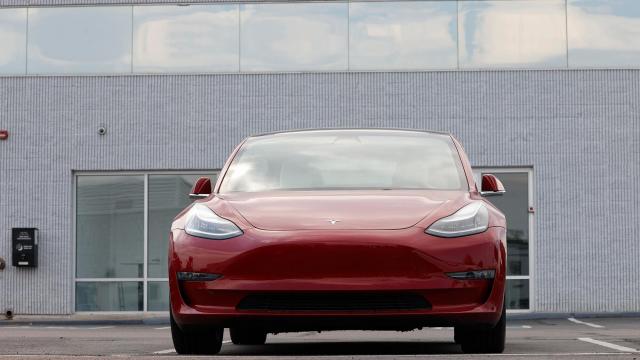 CNN — Tesla is preparing to split its stock, making it more affordable for average investors. It may need to do another one pretty soon if its shares keep surging.

Tesla has skyrocketed 50% since announcing the stock split on August 11. It now trades at nearly $2,100 a share.

Once the split goes into effect on August 31, current Tesla investors will get five shares for each one they own. That will cut the price by a fifth, to almost $420 a share. The market value of Tesla, now hovering around $390 billion, will remain the same.

But does Tesla deserve to trade at such a high valuation? While the Elon Musk-led company is generating consistent profits, its sales are dwarfed by the major auto giants.

Tesla is expected to generate nearly $30 billion in annual revenue this year. That's nothing to sneeze at. But Fiat Chrysler is estimated to report $100 billion in sales for 2020. GM and Ford are each forecast to post annual revenue of more than $110 billion.

It seems silly for investors to keep plowing into the stock just because it's about to split.

A majority of Wall Street analysts are betting against Tesla. Of the 33 that officially track the stock, only eight have a buy rating on Tesla while 15 have it rated a hold and 10 are recommending a sell on it.

Only three of the Tesla analysts currently have a price target for it above $2,000. The consensus target is just under $1,300 -- almost 40% below its current price.

Tesla continues to be a big target of short sellers, investors who borrow the stock and sell it with the hopes of eventually buying it back at a lower price.

Of course, Tesla fans can correctly point out that analysts have been consistently wrong and that Wall Street will eventually have to raise its earnings forecasts and price targets on the stock.

Tesla may also get a further boost if it is finally added to the blue-chip S&P 500 index -- a move that could soon happen now that the company has posted a consistent run of profitable quarters.

Mutual funds and ETFs that mimic the S&P 500 will be forced to add Tesla shares en masse if the company is added to the index.

If Tesla were in the S&P 500, it would be the ninth largest company in the index. Tesla's market value surpassed Walmart's on Friday.

The fact that so many short sellers have piled into Tesla also might have helped fuel the rally.

Because short sellers lose more money as the price goes higher, investors betting against Tesla are often forced to buy back the stock in order to cover their position and avoid further losses. That creates a phenomenon known as a short squeeze that can push the stock up even more.

But even Tesla bull Ross Gerber, co-founder and CEO of wealth management firm Gerber Kawasaki and an owner of Tesla shares, tweeted Thursday that he thinks the stock is "being bid up potentially by people who think the split will make them money. Be careful."