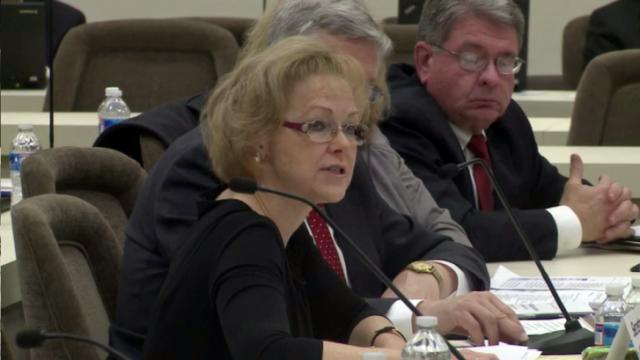 Raleigh, N.C. — Tensions between state lawmakers and Department of Health and Human Services Secretary Aldona Wos reached a new high Thursday at a rocky meeting of the commission that oversees government operations.

Lawmakers publicly aired their frustrations with a string of problems at Wos' agency, from difficulty getting budget data to IT problems affecting Medicaid providers and patients alike, and said it could jeopardize their willingness to move forward with the governor's Medicaid reform initiative.

Wos responded that her agency is being "micromanaged" by state lawmakers.

During her opening comments, Wos referred to Wednesday's announcement of a projected $130 million Medicaid shortfall – smaller than in recent years – as a success.

"DHHS has been in crisis management mode since Day One. No challenge was bigger than Medicaid, but due to the aggressive realignment, Medicaid finances and operations are substantially stronger today than when we arrived," Wos said. "We are finally approaching a steady state."

But she also noted that "vacancies in key leadership positions" and a 20 percent vacancy rate in the Medicaid program staff overall is making the job more difficult.

"We must secure our workforce with proper compensation with proper skill sets," she said. "I beg you, step up to public service and apply for these jobs. Otherwise, we’re going to the outside consultants."

Wos said the search has been ongoing, "working through outside private industry" nationwide. "Unfortunately, no one has been willing to step up to the plate."

She said the main obstacles to filing the position are "the salary, No. 1, and fact that we are fairly restricted in North Carolina. Very directly, it’s because we are micromanaged, and so, for someone coming from out of state, they may not see that they have an opportunity to succeed."

Asked to clarify, Wos said federal and state requirements for reporting are onerous, and lawmakers' additional requests for information are an extra burden.

"We beg – ask only what you need from us and not more. We have an incredible amount of reports that we have to present to you," Wos said.

"Set your goals, set your expectations and allow us to get there," she told the panel, "allowing people to do what they need to based on their portfolios once you establish what you would like."

But lawmakers said they're getting too little information from the agency as is, especially in terms of budget forecasting data.

Sen. Bob Rucho, R-Mecklenburg, said the information presented Wednesday should have been made available months ago, and he noted that it's still not detailed enough for a forecast.

"When will we get the numbers that we need to have so that we can have a good budget number?" Rucho asked.

Wos said more information is coming in every day, and she noted that all three forecasting authorities – her department's, the governor's budget office, and the legislature's fiscal division – are "in the same range," which she called unprecedented.

"We wish that we would be able to get it perfect. We have a mutual goal. We wish it was quicker. Unfortunately, the timing and where everything unfolded with the IT problems and the (Affordable Care Act) did happen in 2013. That was not under anyone’s control, sir," she responded.

Other lawmakers pointed to ongoing problems with NCTracks and NC FAST, the troubled systems that handle Medicaid billing and social services delivery, respectively.

"Then we see a lot of people leaving – a lot of key people leaving has really put your department in a real tough position," Brown continued. "Now, we see a Medicaid reform bill coming out. How can we as a General Assembly feel safe or comfortable that you can implement a reform package when you have all these problems?"

Wos replied angrily, "It was us who had requested Ernst & Young to prove to the General Assembly and everyone else that yes, we are short-staffed, yes, we don’t have the talent, and yes, we do need reform.

"Anyone in the community who still has issues with NCTracks, we ask you to please identify yourself and come to us, and we will help you resolve your issues," she added. "We are asking you to please file your claims and make yourself known, if you have any issues."

Although forecasting problems with budget cuts need to be resolved, he said, "I think it’s a great progress that we’re dealing in the range that we’re currently dealing with."

The Republican leadership at the legislature "has fixed probably 90 percent of the problems we inherited," Dollar said.