Teen vaping use grows along with parental concern about the trend

Raleigh, N.C. — While the number of teens smoking cigarettes has significantly declined, vaping appears to be growing in popularity, a trend that has raised concern among many parents.

Although vaping has become a popular way for adults to wean themselves from smoking nicotine cigarettes, researchers say they still don't know if vaping is safe for young people.

Kevin Dignan, a high school senior, said he vapes because it's better than smoking cigarettes.

"Vaping seems like it's just a little bit healthier," he said. "And it's just a cooler way to smoke.. It's just a fad that’s in right now."

Parents and doctors are concerned

"Vaping is the inhalation (and) exhalation of a vapor or aerosol," said Dr. Momen Wahidi, a pulmonologist at Duke University Hospital.

He agrees that vaping is better than cigarettes for adults who are trying to quit smoking, but adds that it may have the opposite effect on teens.

He said because vaping is relatively new in the U.S., we don't have enough scientific data yet to deem the practice safe.

"I would tell my kids that these are chemicals that we are putting in our bodies (and) in our lungs that we don't know the long-term effects of," Wahidi said.

Mary Wilkinson, a high school senior, said: "I think its probably better than smoking cigarettes, but I think it's still bad for you. It's definitely not good for your lungs."

A December 2017 study by the National Institute of Drug Abuse found that while smoking is declining among teens, one in three high school seniors are vaping.

"I think it is very common at our school," Mary said. "I think it's a huge epidemic for our generation."

"As an educator, I want to know why youth are using it," she said. "Nicotine in any form is addictive."

"Now, all of a sudden, we're starting to see the e-cigs," Wheeler said. "And that social norming of smoking can start to creep back in when we least expect it."

Rod Crews owns the Quick Shop Discount on New Bern Avenue in Raleigh. He said he only sells vaping products to adults because the FDA prohibits sales to anyone under 18.

"Predominately, that's the No. 1 reason why more people ultimately come in is because they want to quit cigarettes," he said.

Why are teens vaping?

Despite the FDA rules, teens are vaping.

Wheeler said we should try to understand why underage kids are doing it.

"They're trying to cope with those outside stressors, and if that's one of the main reasons, we need to help them learn how to deal with and cope with stress," Wheeler said.

She said parents also need to teach their children the art of refusal.

"If you feel uncomfortable (or) if a friend is asking you to do something you don't want to do, how are you going to use those refusal skills to be able to protect yourself?

Wahidi says its time to change the popular narrative that vaping is safe for teens.

"We have made such strides in decreasing the use of tobacco products, and now we have to deal with this new addition of potentially harmful products," he said.

The Poe Center is concerned that many vaping shops are being opened in neighborhoods that are close to where teens hang out, specifically schools. Center officials say cities should consider stricter zoning laws to more closely regulate their location. 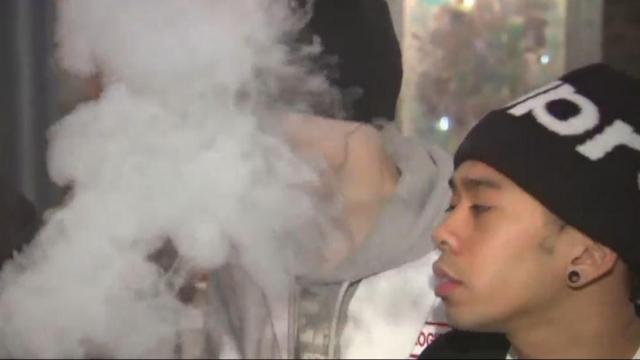 The National Academies of Sciences, Engineering, and Medicine takes a comprehensive look at evidence on the human health effects of e-cigarettes and vaping. For full report: Click here

Use by youth and young adults