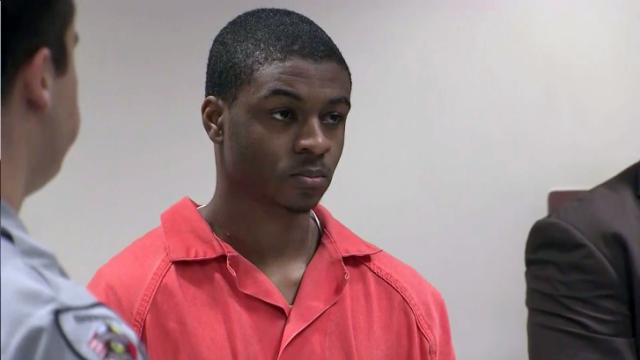 Fayetteville, N.C. — One of two men charged in the 2014 strangulation death of a Hope Mills teen pleaded guilty Monday to being an accessory after the fact of murder.

Dominic Tayvon Lock, 19, had been charged with second-degree murder in the case. As part of his plea agreement, he could provide testimony in the trial of co-defendant Je'Michael Malloy.

Danielle Nicole Locklear, 15, had been missing for three weeks when her body was found April 3, 2014, in the South River near the Cumberland-Sampson county line. Authorities said Malloy, 19, of Autryville, her ex-boyfriend, confessed to strangling her, watching as Lock stuffed a sock down her throat and tying her body to cinder blocks before tossing her into the river.

Locklear was a freshman at South View High School in Hope Mills.

Lock's sentencing has been put on hold until Malloy's case is handled, which Cumberland County District Attorney Billy West said could be in six to 12 months. Malloy also is charged with second-degree murder, but a grand jury could upgrade it to first-degree murder.

Lock had been free on bond, but he was taken into custody after his plea and placed in the Cumberland County jail without bond.

Accessory after the fact of murder carries a minimum prison sentence of less than four years and a maximum sentence of more than eight years. Lock will get credit for his time in jail awaiting Malloy's case.