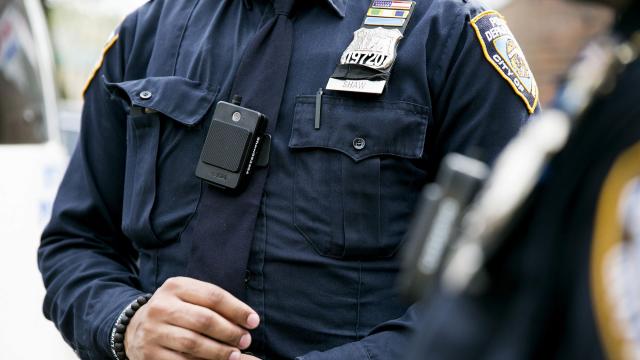 NEW YORK — Marijuana arrests are the latest battleground for critics of the police who are fighting to reverse years of racially imbalanced policing in New York City. While the Police Department has sharply scaled back marijuana arrests recently, more than 6,000 people, most of them black or Hispanic, were arrested in the first six months of 2018 over small amounts of pot.

Until recently, these arrests were rarely taped, but that has changed now that many police officers in New York City wear body cameras.

The New York Times has obtained body-camera recordings that document one arrest earlier this year on Staten Island. The videos offer a rare look at a type of encounter the public seldom sees and show how aggressively the police will pursue a minor marijuana case, in some circumstances, and the subtle social dynamics that shape policing in New York City.

But the videos also raise questions about how far the police will go to make an arrest. Lawyers for the defendant, Lasou Kuyateh, argue that the recordings contain possible proof that one of the police officers planted a marijuana cigarette in Kuyateh’s car. The officer and the Police Department deny the allegation.

It is not unusual for defendants to accuse the police of planting drugs, but rarely does evidence exist to support the accusation. In this case, however, the footage provides ground for heightened suspicion.

Though not conclusive, the recordings were problematic enough that prosecutors abruptly dropped the marijuana charge while one of the officers was in the middle of testifying at a pretrial hearing. The judge expressed concern about the officer’s testimony. Prosecutors encouraged the officer to get a lawyer. An internal police investigation later found no evidence of misconduct.

Kuyateh maintains that he was framed. His case underscores how difficult it can be to find out what happens during police encounters, even when the officers are wearing cameras.

On Feb. 28, two officers from Staten Island’s 120th Precinct, Kyle Erickson and Elmer Pastran, stopped a BMW sedan. The officers said the windows were excessively tinted and the car had turned without signaling. Four young black men were inside.

It appeared that at least some of the young men in the car had been smoking marijuana, which they admitted during the stop. But the young men told the officers they had just finished smoking and insisted there was not any more marijuana in the car.

“I don’t appreciate being lied to,” Pastran responded. “I know there is weed in the car. I smell it.”

After several minutes, Kuyateh, the driver, shouted that Erickson had put something in his car. He was arrested on the charge of obstructing the police investigation.

Erickson then said he had discovered a marijuana cigarette, which he claimed had been burning on the floor behind the driver’s seat. It was in the same general area Pastran had already searched, leading him to declare, “looks pretty clear.” Erickson’s camera turned back on just before he made the discovery.

Wait, the police still lock people up for marijuana?

Yes, in this case Kuyateh, the driver, was arrested and spent two weeks in jail, until he made bail.

The New York Police Department has historically aggressively enforced marijuana laws. Marijuana arrests soared to more than 50,000 a year under Mayor Michael Bloomberg, when the police often stopped young men on questionable grounds and searched them for contraband, a practice a federal judge eventually found unconstitutional.

In 2014, Mayor Bill de Blasio took office on a promise to roll back “stop-and-frisk.”

Yet marijuana arrests still remained an element of the department’s broken-windows policing strategy, which relies on aggressively cracking down on minor crimes and disorder. An average of 17,500 people have been arrested each year for marijuana possession since late 2014.

What do we know about the individuals in this case?

Kuyateh, 19 at the time of the arrest, lived in Park Hill, a high-crime area in northeast Staten Island. Two years ago he pleaded guilty to an assault, according to the Staten Island Advance, though that case was sealed because he was a minor. His lawyers say he has no other criminal convictions.

Kuyateh said in an interview that he works two jobs. He recently bought the BMW used and was taking his friends for a drive on the day of the arrest.

Pastran told his partner in one video that Kuyateh and his friends were “all OTA,” a local violent youth gang. But Kuyateh said in the interview this was false.

Pastran and Erickson had been on the force for less than five years and appear to have unblemished records. Erickson declined to comment and Pastran did not respond to messages seeking comment.

Erickson comes from a family of police officers. In the videos, he appeared quieter and less gregarious than his partner. While searching the car, he expressed frustration and urgency.

“We have to find something,” he said. “You know what I mean?”

Pastran, a U.S. Air Force veteran, recognized the passengers from past interactions and kept a steady stream of banter with them, even as he searched them. The chatter seemed to work. The young men seemed more inclined to comply with his directions than his partner’s.

Why is there a gap in Officer Erickson’s body-camera video?

Erickson testified over the summer at a pretrial hearing in Criminal Court in Staten Island that his camera turned off on its own, from some “technical difficulty.” This had happened on other occasions, too, he said.

Police officials suggested the camera may have deactivated when Erickson leaned into the driver’s seat while searching the car, possibly sliding the main switch — on the camera’s front — into the “off” position.

Erickson said he reactivated the camera — more than four minutes later — after he realized it was off, senior police officials said. The timing corresponded to the moment he was reaching for the marijuana cigarette.

“All right, this was in the back seat on the floor,” Erickson narrates for the camera. “It’s a marijuana cigarette, it’s lit, just had to put it out.”

Did the court get to the bottom of what happened?

No. Kuyateh appeared in court at least 10 times to fight the charges and even rejected a plea offer that included no jail time.

But in the middle of Erickson’s testimony, something unusual happened. The judge, Christopher Robles, intervened, ordering the lawyers to meet with him in an off-the-record sidebar.

At the judge’s direction, the district attorney’s office informed the Police Department that Erickson might need a lawyer, according to a court transcript and interviews. Erickson did not finish his testimony. Instead prosecutors dismissed the charges against Kuyateh, citing the gap in Erickson’s body-worn camera as the reason.

At a final court hearing last month, Kuyateh’s lawyer, C. Taylor Poor, of The Legal Aid Society, repeatedly tried to address what the evidence would have shown had she been able to finish questioning Erickson about what happened during the search. But the judge cut her off.

“This case is dismissed and sealed,” Robles said. “What I’m not going to allow happen is my courtroom to become a political place where these things are brought up.”

Is it possible the officer did find a lit blunt in the car?

Yes. The video does not prove conclusively that Erickson planted anything. But it does raise a troubling question: How did Erickson find a lit marijuana cigarette in plain view on the rear floorboard just minutes after Pastran searched the same area and found nothing?

Erickson declined several requests to be interviewed for this article. Internal investigators at the New York Police Department reviewed the videos and found no misconduct.

“After a thorough investigation, the allegations were determined to be unfounded,” the Police Department’s chief spokesman, Phillip Walzak, said in a statement.