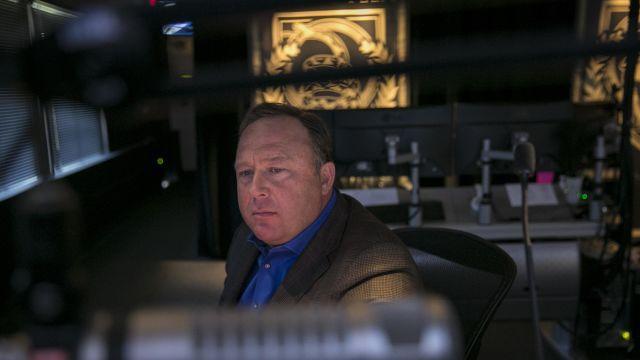 Top technology companies erased most of the posts and videos on their services from Alex Jones, the internet’s notorious conspiracy theorist, thrusting themselves into a fraught debate over their role in regulating what can be said online.

Apple, Google, Facebook and Spotify severely restricted the reach of Jones and Infowars, his right-wing site that has been a leading peddler of false information online. Jones and Infowars have used social media for years to spread dark and bizarre theories, such as that the Sandy Hook school shooting was a hoax and that Democrats run a global child-sex ring. Apple made its move Sunday and the others followed Monday.

The actions, one of the tech companies’ most aggressive efforts against misinformation, highlighted a difficult dilemma for their businesses. They have long desired to combat misinformation online, but they have also been reluctant to be arbiters of truth.

But since a rise of misinformation online around elections, such as the 2016 presidential vote, the tech companies have faced increasing calls from lawmakers and the news media to address their role in that spread of false information and a related increase in partisan divisions. The tech companies have recently stepped up enforcement — but that has led to accusations of political bias, largely from conservatives.

The moves over the last two days helped fuel that debate. “Whether you like @RealAlexJones and Infowars or not, he is undeniably the victim today of collusion by the big tech giants,” Nigel Farage, a British conservative politician, said on Twitter. Farage helped lead the successful campaign for the country to leave the European Union and has been interviewed by Jones. “What price free speech?”

Apple on Sunday removed five of the six Infowars podcasts on its popular Podcasts app. Commenting on the move, a spokeswoman said, “Apple does not tolerate hate speech.”

Facebook, Spotify and Google’s YouTube site, which removed some Infowars content last week, followed with stronger measures Monday. Facebook removed four pages belonging to Jones, including one with nearly 1.7 million followers as of last month, for violating its policies by “glorifying violence” and “using dehumanizing language to describe people who are transgender, Muslims and immigrants.” Facebook said the violations did not relate to “false news.”

Jones and Infowars are leaders in using the internet to spread right-wing conspiracy theories, an effort that was aided after Donald Trump appeared on Jones’ show during the 2016 presidential campaign and praised Jones’ reputation as “amazing.” Jones has repeatedly claimed that the government staged the Oklahoma City bombing, the Sept. 11 terrorist attacks and numerous other mass shootings and tragedies.

Jones is facing defamation lawsuits filed by the parents of victims of the Sandy Hook school shooting for claiming that the shooting was an elaborate hoax. Most of Jones’ conspiracies push a theme that a global cabal of political and corporate leaders run the world’s institutions to brainwash citizens and take away their rights. Jones partly finances his operation by selling expensive nutritional supplements and vitamins between Infowars segments.

“To many, Jones is a bad joke,” said the Southern Poverty Law Center, which tracks hate groups. “But the sad reality is that he has millions of followers who listen to his radio show, watch his ‘documentaries’ and read his websites, and some of them, like Boston Marathon bomber Tamerlan Tsarnaev, resort to deadly violence.”

Jones and Infowars did not respond to requests for comment.

In a message posted on Twitter on Monday, Jones said: “The censorship of Infowars just vindicates everything we’ve been saying. Now, who will stand against Tyranny and who will stand for free speech? We’re all Alex Jones now.” He railed against the tech companies on his live show Monday, which was streamed on the Infowars website, saying their moves were part of a leftist agenda in advance of the midterm elections. “I told you this was coming,” he said to viewers.

The big tech firms that control, via their websites and apps, how much of the world’s media content is distributed have faced criticism in recent weeks for enabling Jones and Infowars.

Some tech companies, including Facebook and Google, had appeared reluctant to remove Jones’ pages entirely and were instead taking action against specific videos or podcasts. YouTube, for instance, recently deleted four of Jones’ videos.

A Google spokesman said Monday that YouTube terminated Jones’ channel outright because he continued to flout policies he had already been penalized for violating.

Jones had amassed millions of followers, but limiting his influence does not solve the problem of false news. Hundreds of smaller publishers promote similar conspiracy theories, and millions of followers help spread those theories by reposting them. A new conspiracy theory called QAnon, for instance, has been gaining traction outside of Jones’ sphere. And Infowars followers can also still repost videos and articles from the site onto YouTube and Facebook.

But the moves are a significant hit to Jones’ ability to reach wide audiences, and particularly new followers. YouTube was a particularly important distribution channel, in part because YouTube’s recommendation engine frequently surfaced past Infowars videos to users who had shown interest in conservative topics. Terminating his YouTube channel erases all its past videos and restricts it from posting new ones.

Jones and Infowars still have other ways to reach listeners and readers. They have increasingly been directing viewers to visit the Infowars website, which would limit their reliance on the tech companies, presumably foreseeing the bans. Twitter has not restricted the accounts of Jones or Infowars. A Twitter spokesman said the accounts were not in violation of Twitter’s rules. Other tech companies’ approaches have been uneven; they have left up Infowars content on some of their services despite removing it from others.

Infowars introduced a new smartphone app last month that is finding users on Apple’s App store and Google’s Play Store. From July 12 through Monday, the Infowars app was, on average, the 23rd most popular news app on the Google Play store and the 33rd most popular news app on Apple’s App Store, according to App Annie, an app analytics firm. On Monday, the Infowars app ranked ahead of apps like BuzzFeed and The Wall Street Journal on Google, and ahead of apps like MSNBC and Bloomberg on Apple.

Apple decided to allow the Infowars app on its store after reviewing it, according to a person close to the company who spoke on condition of anonymity. The Google Play Store has different policies than YouTube, a Google spokesman said.

Matt Rivitz, a freelance copywriter who helps run a Twitter account, Sleeping Giants, that pressures companies to distance themselves from far-right groups, said Monday that the tech companies’ nearly simultaneous moves against Jones proved they were acting in response to public pressure, not new data showing he broke rules.

“The timing is very puzzling because he’s been saying this stuff for years and they haven’t done anything,” Rivitz said.

Conservatives warned that more sites would be cut off soon.

“To all other conservative news outlets — you are next,” Paul Joseph Watson, a right-wing commentator and Infowars contributor, said on Twitter on Monday. “The great censorship purge has truly begun.”