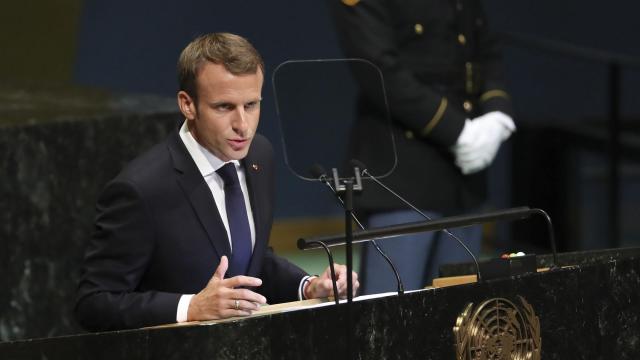 PARIS — Shouts of “Macron resign!” and “Macron get lost!” punctuated the booms from tear gas and water cannons on the Champs-Élysées on Saturday, as French police forced protesters from the “Yellow Jackets” movement away from the presidential offices in the Élysée Palace.

French protest movements come and go, but this one, organized on the internet, is different. Welling up rapidly from rural and forgotten France, this broad-based, citizen-driven movement is among the most serious challenges yet to President Emmanuel Macron’s pro-business government, say analysts, political opponents and even many of Macron’s supporters.

On Saturday, thousands of Yellow Jackets, named for the fluorescent road-safety vests that all French drivers must carry in their vehicles, converged on Paris for a second weekend to protest a rise in fuel taxes and to express general discontent with the fiscal burden in one of the most highly taxed states in Europe, where taxes represent over 45 percent of GDP.

The numbers had dropped sharply from the preceding week’s several hundred thousand protesters; police estimated there were about 8,000 in Paris and more than 80,000 across the country Saturday. But this time, more were concentrated on the protesters’ symbolic targets: the capital and Macron himself.

Clouds of gas and smoke rolled up the Champs-Élysées all afternoon as police battled militant members of the crowd wielding paving stones; the grassroots protesters insisted they were unconnected with their movement.

“We’re just fed up. It seems like to us that the government is only working to maintain its own privileges,” said Mathieu Styrna, one of the thousands marching down the Champs-Élysées. A contractor, he said he had been forced to drive hundreds of miles a week for work and could no longer afford his gas bills.

For the protesters, it was all about making ends meet.

“Why should we have to finance their projects?” Styrna said, referring to the government’s plan to discourage car use through gas taxes. Many in the crowd said that they did not disdain the government’s environmental goals, but that their own survival was more important.

The movement appears to be without leaders, and the opposition parties in France have scrambled to keep up with it.

“This amateurism, it’s the sign of the crisis of the French political system,” said Dominique Reynié, a political scientist at Sciences Po, referring to the protesters’ loose organization.

“It’s really quite incredible. This is the most impressive event since Macron came to power,” Reynié added. “It’s a profound crisis.” The movement has forced itself on the government’s unwilling attention with a message analysts say is not going away soon: We are in trouble.

Like many at the protest, Styrna, a father of three, said he had trouble paying his bills. “It’s not even by the end of the month; it’s by the middle,” he said, referring to point when the funds run dry. “We don’t even go out any more — no cinema.”

Julien Viguerard, 31, who works in a biscuit factory in Toulouse, said: “The end of the month? Ha! It’s the 15th for me.”

He has seven children, earns 1,500 euros a month, about $1,700, and is “sick of being taxed on everything.” The problem “is low salaries,” he said. “I’ve got children to feed. We’re not just imbeciles. They treat us like cattle. We can’t accept it.”

Saturday’s protesters came from all over France. Many said they had been recruited on the internet, followed no political movement and emphasized that they simply didn’t have enough to live on.

“I don’t have the means to live or to die,” read the sign held up by Jennifer Hurau, who works as an online saleswoman in the Paris suburbs on a temporary contract that is soon to end. For now, she makes 1,600 euros a month and pays 550 euros in rent. “I don’t know what I will do,” she said.

It is the movement’s amorphousness that makes it new, powerful and potentially dangerous for Macron, analysts say.

“The government parties didn’t understand that their tax policies would wind up producing this,” said Reynié, the political scientist. “This is a movement that thinks the political parties are incapable of producing a solution. It is part of the chemistry of populism,” he added, pointing out that the tax burden had grown by about 25 billion euros every year between 2002 and 2017.

“This is the first time we’re seeing a mobilization that’s coming from the social networks, and not led by the political parties or the unions,” said Jean-Yves Camus, a political scientist who heads the Observatory on Political Radicalism.

“This is really a populist-type movement, and it’s an extremely strong protest against elite France,” he added. “It’s a protest against tax policy that’s considered confiscatory. And there’s been an undeniable drop in the buying power not just of the workers, but of the middle class.”

The government’s response to the protest movement so far has been halting, “a sort of condescension,” Camus said.

No high-ranking official has met with any of the self-designated spokespeople for the movement who have been appearing on French television all week. There have been a few small fiscal gestures — promises of checks and rebates — but these were dismissed by Saturday’s protesters as irrelevant to their daily struggle.

Macron, in a speech to some of the country’s thousands of mayors this past week, did not mention the Yellow Jacket protests directly, but instead spoke in his usual finely sculpted abstractions.

“The challenge that is ours is to invent a new grammar,” the president said.

Later, in a question-and-answer session with the mayors, the president did address the protests, obliquely, and largely to complain about them.

“It’s a little bit unfair,” he said. “They see my face when they fill up at the gas pump.”

Macron added: “There is a moral crisis in society. The risk is in the ambient demagogy. I’m hearing the anger. But I don’t want to hear it in a demagogic fashion.” Even some of the president’s own supporters in Parliament have expressed concern that the anger of the protesters is not being heard. Their own insurgent political movement was partly born of this anger, they said.

“They’re expressing a seething anger, which we know about,” said Thomas Mesnier, a parliamentary deputy in Macron’s party. “People are waiting for results, and they are waiting for their daily lives to improve.”

“This is a movement without precedent, and we don’t have a good diagnosis of it,” said Nicolas Démoulin, another Macronist deputy in Parliament. “We’ve got to go to these citizens who feel they are completely shut out of politics.”

The government declined to make its spokesman available for a response to the Yellow Jackets protest. On Friday, the spokesman, Benjamin Griveaux, told French television that “the crisis is deeper than just over the price of gas,” but “one must never set the environmental fight up against social justice.”

There was disappointment and bewilderment at Macron’s response to the protests at the giant annual French mayor’s convention in Paris this past week.

“The response has been out of step, disconnected,” said Sony Clinquart, the mayor of a small town near Dunkirk in the north.

“There is a lack of intermediary between him and the population,” said Isabelle Henniquau, the mayor of a town near the Swiss border. “He should explain what he is going to do.” By Saturday afternoon, the Champs-Élysées was a battleground of overturned barricades, billowing smoke, bonfires and pushing between Yellow Jackets protesters and police.

“We’re hungry and we’re fed up,” said Jessica Monnier, 28, who works in a watch factory in the French Alps. She earns 970 euros a month, and said: “Once I pay my bills, I don’t have enough to eat. We’re just hungry, that’s all.”