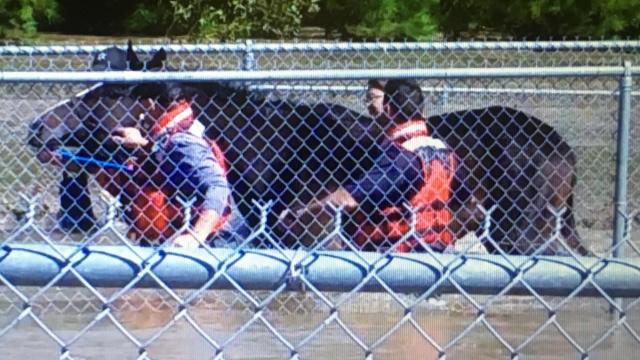 Fayetteville, N.C. — As hundreds of people were evacuated from their homes due to rising flood waters, the Cumberland County Sheriff’s Office Swift Water Rescue Teams have had to assist in the removal of animals trapped by rising waters.

Water filled the rear parking lot of the Cumberland County Animal Control facility and began flooding livestock pens in the aftermath of the storm. Animal control asked for FEMA assistance in relocating the animals affected by rising waters, but the request was denied.

Authorities with the Cumberland County Sheriff’s Office said Bob, a 6-year-old horse, was being housed in one of the animal control livestock pens that was rapidly filling with water. The horse needed to be moved through deeper water to reach higher ground.

Although not trained in animal rescues, the Swift Water Rescue Team was able to relocate Bob to safety, where he was loaded on a trailer and transported to another facility.

Authorities said Bob is currently looking for a forever home and can be adopted for a nominal fee of $125.