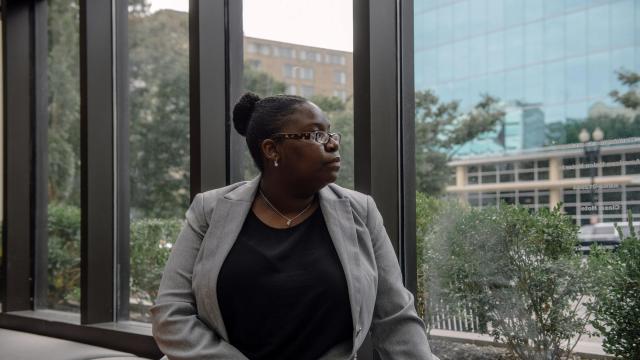 Backed by one of the nation’s biggest unions, nine teachers filed a lawsuit on Wednesday accusing the student loan servicer Navient of negligently blocking their access to a troubled federal loan forgiveness program for public service workers, adding thousands of extra dollars to their debts.

The lawsuit, which is seeking to become a class action, was filed less than a week after a government audit report detailed extensive problems with the loan forgiveness program. In the year since the Education Department began accepting loan discharge applications, it has rejected more than 99 percent of them. Nearly 28,000 sought relief, but only 96 borrowers received it, according to the audit.

To qualify, borrowers must work for government or certain nonprofit employers for at least 10 years, have the right kind of federal loan (a “direct” loan), and have made 120 monthly payments on it through a specific type of payment plan. Servicers like Navient are supposed to guide people through all of those hoops.

Instead, Navient gave inaccurate information to borrowers who sought help joining the program, and discouraged them from taking steps necessary to qualify, according to the lawsuit, which was filed in federal court in Manhattan.

The American Federation of Teachers is paying for the lawsuit.

Student loan debt now totals $1.5 trillion, more than Americans owe on credit cards or auto loans, and has created economic ripple effects, including lower home buying rates among people in their 20s and 30s. For teachers, whose low salaries have become a political flash point this year, the strain can be especially acute.

The public service loan forgiveness program, created by Congress in 2007, was supposed to ease the financial burdens of those who chose to work in a wide range of jobs, including military service, law enforcement and public museum workers. But when the teachers’ union investigated why more of its members weren’t using the program, it found that many were being misled or blocked by Navient, said Randi Weingarten, the union’s president.

“We felt that we had an obligation to pursue this, to stop these predatory practices and get some compensatory relief,” Weingarten said.

Federal loan servicers are paid by the Education Department. Just one servicer, the Pennsylvania Higher Education Assistance Agency, known as FedLoan, handles those seeking public service loan forgiveness. The lawsuit accuses Navient of steering customers away from the program to avoid losing accounts to FedLoan.

A Navient spokeswoman declined to comment on the lawsuit.

Michelle Means, 32, one of the case’s plaintiffs, is a first-grade teacher in Maryland. She has an undergraduate degree, a master’s degree, a teaching certification and around $60,000 in federal student loan debt, she said.

In 2011, Means heard from colleagues about the loan forgiveness program. When she asked Navient how to qualify, representatives told her that she would need to make all 120 payments consecutively, she said, and that if she missed a single one, or deferred her loans at any point, she would lose her eligibility.

“I was concerned that would be impossible,” Means said. “Life happens. I asked multiple times about the rules, and nothing was ever consistent from one representative to another.”

The details Means said she was given were incorrect. Payments do not need to be consecutive and deferring a loan does not stop a borrower’s past payments for counting toward the 120 that are needed.

But Means said she was discouraged and did not take the necessary steps to switch to a qualifying payment plan. Now, she is frustrated to have missed out on years of payments that could have put her closer to having her federal loans forgiven.

Means is far from alone. Tens of thousands of people have complained to federal regulators and lawmakers about the public service program’s confusing rules and said that their loan servicers offered little help in navigating them. An analysis last year by the Consumer Financial Protection Bureau found that an overwhelming majority of borrowers trying to use the program had been knocked out by technicalities.

Some have, like the teachers, gone to court. In June, a federal judge in Florida rejected Navient’s motion to dismiss a similar case brought by six people who are also pursuing a class-action claim.

One of those plaintiffs, William Cottrill, 61, a meteorologist for the National Weather Service, said he called Navient several times over the past decade to see if he was on track to have his loans forgiven. Each time, he was told that he was in good shape and should keep making his $1,100 monthly payment, he said.

Last year, thinking he was nearly finished, he sent in a form to certify his employment. He then found out that none of his payments qualified because he did not have a direct loan. Had Cottrill been told that earlier, he could have consolidated into a qualifying loan.

Cottrill said he had planned to retire next year. Instead, with $140,000 in federal loans remaining, he is resigned to what he called the “toes-up” retirement plan: “I’m going to retire when they carry my body out of my office.”

“We can’t allow student loan servicers to brazenly lie to people and have no repercussions whatsoever,” Centrone said.

But significant legal hurdles remain, including efforts by the Education Department to block states and individual borrowers from suing servicers.

A lawsuit Centrone filed on behalf of other borrowers with similar claims against another servicer, Great Lakes Higher Education, was halted last month by a federal judge in Gainesville, Florida.

The judge cited a memo released by the Education Department in March that said only the department can regulate federal student loan servicers. That instruction from the department has been challenged in multiple court cases.

Judge Mark E. Walker concluded — with “deep regret,” he wrote in his ruling — that federal law prevented the borrowers’ claims.