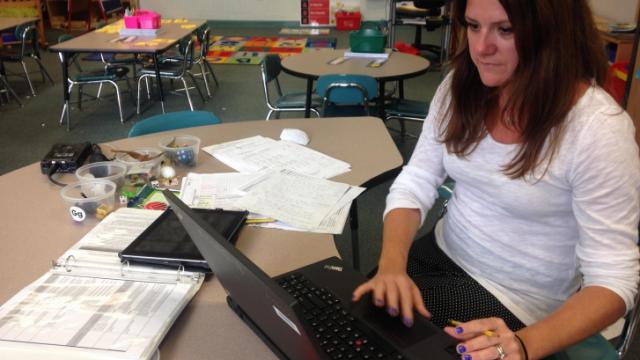 In North Carolina public schools, formal assessments do not begin until third grade, but many students develop learning problems long before then. That’s why education leaders say they are rolling out a statewide plan to begin assessing students in the earlier years.

Now, that does not mean five- and six-year-olds will have more paper and pencil tests. Instead, the responsibility will fall on teachers to track the development of their students.

Kindergarten teacher Michelle Russolese sits at wooden table with four fidgety students. She has a simple task for them. Can they identify what letter the objects in front of them start with?

The kids are soft-spoken, cautiously answering their teacher’s questions. Of the four students, three of them are successful. A young boy at the end of the table has a harder time.

“Do you want me to help you?” asks Russolese as she sounds out the word ‘drum.’

The student stares at her blankly. He places the toy drum in a container labeled with the letter F.

After her students leave for gym, Russolese reaches for her computer and begins typing down notes. She writes that one of her students hasn’t mastered identifying sounds. The activity, she says, was a formative assessment.

“It’s more like a hands-on task, where you’re observing…and seeing if a kid can or can’t do it,” she says. “...versus a paper and pencil test where they’re choosing the right answers, then you’re going back and grading them.”

Russolese and almost 250 kindergarten teachers are part of a state pilot program that’s encouraging them to do more of this hands-on formative assessment – to be more intentional about recording work samples, conversations and activities. The hope is that they’ll be able to gain a better understanding of how their students develop.

“The assessment of student learning in American schools has been exclusively focused on standardized tests and measurements of performance, this innovation changes that,” says Ken Dodge, the director of Duke’s Center for Child and Family Policy.

Dodge co-chairs the K-3 Assessment Think Tank that includes education leaders, teachers and other stakeholders throughout the state. They have been brainstorming and collaborating for months on how to reform early-education learning. Dodge says their idea of evaluating students through daily instruction is a holistic approach.

“So that we can identify the most important areas for learning, continually assess those areas, continually shape instruction so that child doesn’t have gaps,” he says.

Teachers will be expected to examine five areas of development: approaches to learning, cognitive, emotional-social, health and physical, and language and communication.

But all of this begs the question – aren’t some teachers already doing this kind of work in the classrooms?

“It’s not that they haven’t been doing it. We’re trying to capture it in a way to document it and show this as evidence and data that teachers are using and that we want to be valued,” says Cindy Bagwell, project coordinator for the Race to the Top Early Learning Challenge grant with the Department of Public Instruction.

Bagwell says almost $10 million was allotted to this project through the federal Race to the Top Early Learning Challenge grant. The General Assembly has also appropriated some money.

As the pilot program was rolled out this year, Bagwell says she and other education officials are trying to answer some big questions – like how teachers will handle the new approach with all of the demands that are already placed upon them.

“We’re going to have to figure that out,” Bagwell says. “I don’t think we have answers to that yet. It’s going to be part of the process.”

Bagwell says she and others at DPI hope to work more closely with teachers and administrators to make the assessment process manageable so that it is not perceived as “just another thing” for teachers to take on.

“We want it to bring value to the instructional process,” says John Pruette, executive director of DPI’s Office of Early Learning.

Education leaders say the assessments will not be a form of high-stakes testing and that they will not be tied to teacher evaluations.

But that does not mean that it will be easy adjustment for teachers. Kindergarten teacher Michelle Russolese says she sees the benefit in formative assessments, but that teachers will need to receive optimal training to understand how to look at kids developmentally.

She says she is already trying to train her brain to think formative assessment, and it’s changing the way she does things in the classroom.

As part of the pilot, she evaluates her students through conversation, assignments, video and pictures, then plugs all of that data into a computer program.

Russolese says the new process is time-consuming because she is already expected to document grades, behaviors and scores through other local or state programs.

“What are we going to take away to make sure this is the most effective program?” she says. “Because we are going to put it to the wayside if we have four other programs to manage.”

She believes the program will be effective, but that there will be a learning curve. State education leaders say they will continue to listen to teachers to make sure full implementation is meaningful.

They plan to introduce the assessment tools to more kindergarten teachers next fall.