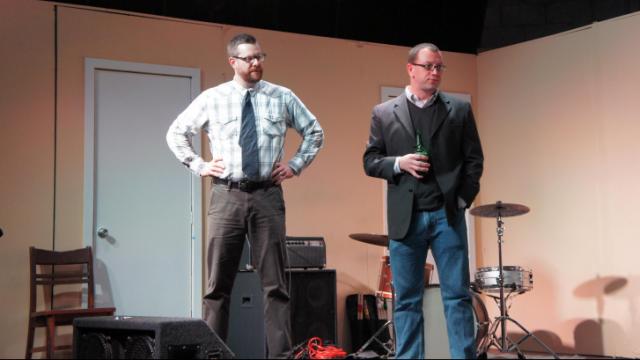 Teacher performance is a hot topic these days, grabbing headlines as communities search for ways to increase student achievement with tight budgets.

With their own experience in the classroom, filmmakers, teachers and Wake County dads Rob Phillips and Jason Korreck hope to tackle the issue with their documentary, "Teacher of the Year." The film will follow long-time Leesville Road High School social studies teacher Angie Scioli over the course of the current school year. Their hope is to "reveal the complexity of teacher performance," according to their website.

Korreck, a former digital media teacher at Leesville Road, currently works with a non-profit that supports public schools. He lives in Raleigh with his wife, two-year-old son and dog.

Phillips is finishing his 15th year as a high school English and media studies teacher. He's currently teaching at Leesville Road High School. His wife is a former Wake teacher with the same number of years in the classroom. The couple live in Apex with their twin kindergartners.

A benefit show to raise money to buy equipment and pay for the film's post-production services for the film is set for 7 p.m., Jan. 31, at Kings Barcade in Raleigh. Admission is $5 for this event (designed for adults). NC Music Love Army, Monsonia and DJ Suggadelic (AKA Mr. Erik from the children's desk at Cameron Village Regional Library, but performing for adults here) are on the schedule to support the film.

I checked in with Rob and Jay to learn more about their project and what's to come. Here's our email chat.

Go Ask Mom: Tell me about yourselves, how you got here, making the film?

Rob and Jay: Because we both teach in the area of media studies, we always found ourselves tossing around ideas for documentary projects that we wanted to work on together. Though the genesis of the documentary is grounded in the notion of media's influence on perception and the representations of teachers in media, we quickly realized that performance is a nuanced word that means different things to different people. Teachers perform for their students, actors perform for audiences, and a lot of people have strong opinions about what makes a good teacher performance. But the film really began coming together when, in the spring of 2013, we witnessed Angie's (Angela Scioli) "Flip the Classroom" presentation, where she described her role as a performer in no uncertain terms. That moment was a real catalyzing moment for the film's direction as we see it.

R&J: The idea of following one teacher occurred to us after our first interview with Angie. Most of the educational documentaries we've seen focus on multiple teachers and because of that choice don't go into as much depth with any individual teacher. Because we know her as a colleague, we think Angie's work as a teacher and a mother is representative of the experiences of many teachers.

GAM: You're about half way through the school year, has anything surprised you? What have you learned?

R&J: Making a documentary is hard work and consumes a lot of our time outside of school, so we want to give a big shout out to our wonderful, supportive wives and families. The topic of teacher performance as a subject is so much more complex than we initially thought. It seems like the result of our research and investigation is more questions. We also continue to be surprised by the level of Angie's performance on camera and off. She is truly an amazing teacher and person.

R&J: The reception amongst teachers has been overwhelmingly positive and supportive. Students have also expressed interest in the project. All of our work has been done outside of school hours.

R&J: Though we have acquired the essential equipment for the project, paying for everything is a separate matter. As teachers and parents, we welcome any financial support that we can attract. We hope to be finished with most of our filming by the summer and most of the editing by the end of this year. These goals are ambitious we know, but we feel like the time for this film is now. We hope that others will agree and consider helping us out. Anyone interested in supporting the film can do so by visiting our website and donating to our PayPal account.

GAM: What's your goal with the film? Where do you hope it will go?

R&J: We hope to inform the conversation about teacher performance and how teachers are perceived for all educational stakeholders in North Carolina, of course, but we believe our film will resonate with audiences beyond the borders of our state. So much of what teachers do is invisible to the general pubic, and we hope our film will pull back the curtain on the realities of teacher performance. Upon completion, we hope to have the film screened at film festivals and to enter it into contests in our state and around the country. We believe the film will ultimately find its audience, and we hope that some of what we've learned will spur others to rethink the work of professional educators.

For more about the film and Friday's fundraiser, go to the Teacher of the Year website. Watch the film's trailer here.