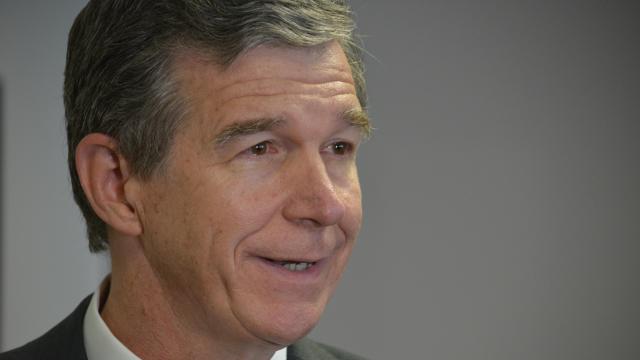 Raleigh, N.C. — Gov. Roy Cooper met with the Governor’s Teacher Advisory Committee Monday to talk about some of his priorities ahead of the 2019-20 legislative session. In its second year after he established the committee, it continues to serve as his eyes and ears in the classrooms and advises him on education issues.

The committee meets quarterly, and independently in smaller breakout committees, as they finalize strategic plans to present to Cooper.

“One of the biggest benefits of an advisory counsel is communication,” Cooper said. “We are able to get first-hand knowledge from teachers who are in the field doing the work, and they can also go back to tell them what’s happening in state government.”

On Monday, Cooper laid out three priorities to the committee, starting with the Teaching Fellows Program, which was reinstated in 2018 after a seven-year hiatus. The program provides up to $8,250 in tuition and fees per year for a four-year education in exchange for a commitment to teach special education or a STEM course in a state public school.

“We need to have a significant expansion of the Teaching Fellows Program,” Cooper said. “It’s one of the best bang for the buck that I can imagine. … We’re getting the very best students who are agreeing to be teachers in our public schools for the next four years for the price of tuition and fees. To me, that is an amazing deal, and we need to expand these Teaching Fellows scholarships.”

“That means more men and it means more people of color in the profession,” Cooper said. “I strongly believe our state government, our law enforcement, our education system ought to look like the people that it serves and protects. Each one of you at this table has been a role model for many kids, and it is important for us to have a diversity of teachers to reflect the diversity of students we have at our public schools.”

Cooper’s final agenda item was communicating the strides the state and education system are making.

As he left, Cooper stopped to talk about the committee and its importance to his governorship.

Cooper recalled how, in its first year, the committee advised him immediately about issues related to the 2017 legislative mandate limiting classroom size.

“That caused significant problems with cutting out of arts programs and computer science programs — [the committee was] sort of a canary in the coal mine for us in that they were telling us that these things were coming down and that their principals were having a difficult time figuring out how they were going to respond to it. This ended up allowing us to present this case to the legislature and they did push it back.”

Now, he is turning to them for counsel on legislative priorities and budget planning.

“They’re working hard on policy initiatives that they see that they want me to undertake,” Cooper said. “We’ve been going back and forth on that right now. An overriding concern right now is attracting and retaining great teachers, and our teacher pipeline not only must be repaired, but it must be enhanced. That’s what we’re working on.”

For NaShonda Cooke, a special education interventionist at Carroll Middle School, the work has been rewarding.

“It’s an amazing opportunity,” she said, “to have such access and close connection with the governor, to be at the table with him and say, ‘Hey, this is what we’re seeing at the school.’ We are the ones who can answer his questions — how to retain the best teachers, how to get the best resources for our students, what’s needed, how to connect with our community members and stakeholders. This is like cutting the middle man out and going straight to the source.”