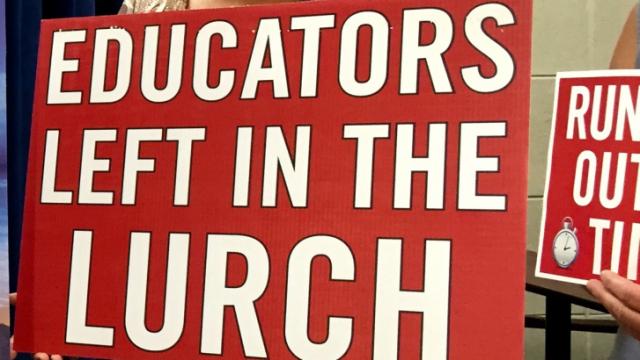 Most school districts will begin their traditional school year within the next two weeks. In their two continuing resolutions, lawmakers have extended the same amount of education funding as last year, plus $100 million for enrollment growth. But it does not extend a $25 million appropriation from 2014-15 for teacher assistants, and it does not guarantee that the final budget won't include cuts to teacher assistants, textbooks and supplies or support personnel.

NCATA spokeswoman Melinda Zarate said school districts have been left hanging as they attempt to plan for the year. Meantime, the Senate proposal to cut 8,500 teacher assistants – "the biggest layoff in state history," Zarate said – is still on the table.

"They need a state budget, but our state lawmakers are asleep at the switch," she said.

Zarate rattled off a list of counties that have either already started laying off teacher assistants or are preparing to do so. One of those counties is Bladen, where NCATA President William Johnston works. A 13-year veteran, Johnston was named Teacher Assistant of the Year in 2012. But he says that won't protect him.

"Bladen County has already laid off teacher assistants and put a reduction-in-force list in place, depending on what the outcome of this budget is," Johnston said. "On that RIF list is 83 teaching assistants, and I am No. 39."

Burlington teaching assistant Erica Johnson spoke about her contributions to her students while raising her own three children on her $19,000 salary, unsure if she'll still have a job in October. She urged lawmakers to invest the $445 million surplus in education, not further tax cuts.

"I wonder, are the politicians lying awake at night like the teacher assistants, wondering if they’ll have jobs? I don’t know if they do," Zarate concluded.. "But with the way they’re treating public schools, they should worry."

House and Senate leaders were seen visiting the Executive Mansion early Thursday morning for what appeared to be a breakfast meeting.

House Speaker Tim Moore said via Twitter that he is "very encouraged" by recent talks and "confident that we will reach a final budget agreement very soon." Meantime, the Senate held a no-vote session Thursday morning with no mention of any budget progress.