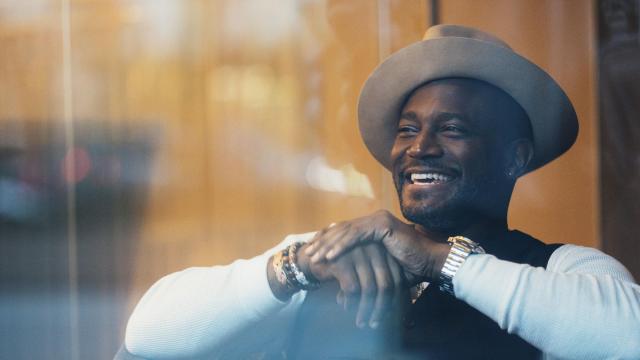 Actor Taye Diggs didn’t want to. On a scarf-snapping fall day, Diggs had arrived at Steps on Broadway, a dance studio on the Upper West Side where he used to study. His publicist had suggested that he’d want to peek into a couple of classes and maybe dance some steps on the side. But Diggs was adamant.

“Do you want to do a warm-up?” Patricia Klausner, the director of marketing, said when he arrived.

“I am not dancing,” Diggs said firmly.

Inside the theater dance class, the teacher, Chet Watkins, demonstrated a jazzy, Bob Fosse-like number set to “Me and My Shadow.” Diggs, 46, is a veteran of Broadway musicals, from his breakout role in the original company of “Rent” to a recent glam-rock stint in “Hedwig and the Angry Inch.” He knows how to articulate a hip and swivel a shoulder.

But that afternoon he huddled under the ballet barre, while students in character shoes strutted in front of him.

Diggs had just wrapped the current season of “Empire” in Chicago, in which he plays Angelo Dubois, the disgraced politician, jilted lover and frequent punching bag. He had then flown into New York to lead a couple of industry readings for “Thoughts of a Colored Man on a Day When the Sun Set Too Early,” a choreopoem he hopes to direct.

He hadn’t been to Steps in years, but he’d told his publicist that he wanted to walk the halls he used to sweep as a work-study student in the early 1990s, reminiscing about his early days in New York.

Tiptoeing out of the theater class, he met up with Suzy Norton-DiCerto, an assistant managing director at Steps and another former work-study kid. Peering down the main hallway, dancer-strewn and sweat-perfumed, Diggs recalled that “as a black man with pride, the last thing I wanted to be seen doing was sweeping, so I picked the late-night shift when nobody would see me.” Norton-DiCerto mentioned that he used to work that late-night shift in “booty shorts.”

“They weren’t called booty shorts then,” Diggs said. He was wearing a lot more clothing now, a black vest over gray pants and a waffle-knit thermal shirt, a tan hat set at a rakish tilt. Earrings sparkled in his ears, silver chains circled his neck. On one wrist he wore a skull bracelet, on the other a dignified Panerai diving watch. “Whenever I’m feeling down, I caress it,” he said.

Students began to approach him, first shyly and then more brashly, asking for autographs, snuggling in for selfies. Diggs obliged, flashing his lightning-strike grin.

“This is heaven for us,” one young man said. “Come back and take a class with us.”

“Absolutely not,” Diggs said. “I would hurt myself.”

The young man offered to arrange a Pilates session before the class and an elastic stretch sequence after. “That way when you get home you’ll still be able to walk,” he said brightly.

As he moved toward the exit, a woman working in the studio’s cafe presented him with a Steps T-shirt. It was black, a good color on him. Does Diggs have any bad colors? “No, I do not,” he said.

Even though he hadn’t really had a workout, he still felt he deserved a post-workout drink. With the elevator broken, Diggs skipped down several flights of stairs and over to the Beacon Bar, where he picked a banquette near the front windows. (When you have been on Broadway as often as Diggs has, you know how to find your light.)

While tourists doubled back to snap his picture, he sipped a glass of sangria and looked across the street at Steps. “Jesus,” he said. “That really took me back.”

Tagged by casting agents early on as “a singer who can move well,” he said, he spent his post-college years studying at Steps and hosting at Pizzeria Uno. He joined the ensemble of “Carousel,” then booked the part of the landlord baddie Benny in “Rent,” opposite actress Idina Menzel. The couple married in 2003 and divorced in 2014.

Hollywood wanted him, first as the boy toy, then as the lady-killer, but always, he said, “the black one. In the black movies.”

Having played leads and love interests in shows including “Kevin Hill,” “Private Practice” and “Murder in the First,” Diggs is no longer typecast as a singer who can move. He is eager to see what else he can do, especially now that an anti-anxiety prescription has straightened out his stage fright.

He and Menzel and their 8-year-old son, Walker, have settled into what he calls “the best worst-case scenario,” and he is developing a comedy “based loosely on my divorce, my life, my kid,” he said.

Though Diggs is a dramatic actor, he has always loved comedy, ever since he was a “skinny, nerdy, insecure” teenager, he said. (He scrolled through his phone, offering “skinny, nerdy” proof.)

And maybe, with enough stretching before and after, he’ll even dance again. “Before I get too old, I’m looking for that one show or that one movie where I can do it all,” he said.