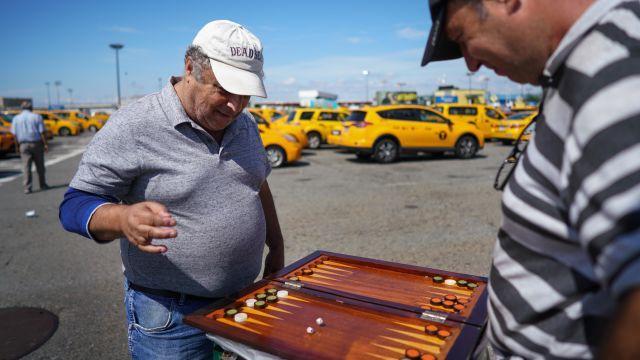 NEW YORK — As New York City weighs new regulations for Uber and other ride-hail companies, a group that is often overlooked has entered the spotlight: the thousands of drivers who ferry New Yorkers across the city every day.

It is their economic despair — underscored by six driver suicides in recent months — that has prompted the City Council to consider legislation this week to cap ride-hailing vehicles in the city and set a minimum pay rate for drivers.

Both taxi and Uber drivers are optimistic that the city’s proposals would halt the flood of vehicles clogging city streets and start making it easier for drivers to earn a decent living.

“There will be more wages for the drivers and things will get better,” S.N. Singh, a taxi driver for more than 40 years, said on a recent morning as he waited at the taxi parking lot near Kennedy International Airport.

Drivers sometimes have to wait at the lot for two or three hours until they are dispatched to a terminal to pick up a passenger. They can often be found playing backgammon on trash bins, chatting in small groups or, on hotter days, napping in their cabs with the windows rolled down.

With an influx of vehicles from Uber and other ride-hail apps, drivers are having a difficult time finding passengers and traffic is slower than ever, Singh said.

The City Council is expected to vote on the proposals Wednesday. Uber has mounted an aggressive and highly visible campaign against the cap, but Corey Johnson, the council speaker, believes it has enough support to pass — a stark difference from three years ago when Uber defeated an earlier cap proposed by Mayor Bill de Blasio.

The legislation would limit the number of vehicles at the current level by stopping the issuance of new for-hire vehicle licenses while the city studies the rapidly changing industry, which has been transformed by Uber’s remarkable rise. Ride-hail companies would be able to add new vehicles only if they are wheelchair-accessible. The legislative package, which de Blasio supports, would make New York the first major U.S. city to impose a limit on ride-hail vehicles. The regulations could set a precedent for other cities seeking to rein in Uber.

There is “resounding support” for the cap among drivers, said Bhairavi Desai, executive director of the New York Taxi Workers Alliance, a group that represents many taxi and Uber drivers. At a recent driver meeting after the council revived the idea, Desai said: “It was the first real moment of hope that I’ve seen at any of our meetings in the last three years.”

Her group has raised concerns about the recent driver suicides, which included three taxi drivers and were attributed in part to financial stress. Taxi medallions — the aluminum plates required for the roughly 13,500 yellow taxis in New York — once sold for more than $1 million but are now worth less than $200,000. The number of for-hire vehicles, which was 63,000 when the cap was proposed in 2015, has surged to more than 100,000 vehicles.

De Blasio defended the cap Friday and argued that it was part of his broader efforts on income inequality.

“What’s happening across the board because of these huge corporations is they are driving down the wages of hardworking people who work in this field,” de Blasio said in a radio interview. “That alone is a reason to call a time out and assess what’s going on here.”

Taxi and Uber drivers compete on the streets for passengers, but they find common ground on the cap. Uber drivers say they also struggle to make a good living after Uber takes its commission — sometimes more than 20 percent — and after paying for high vehicle costs. With no new vehicles joining the app, Uber drivers say they will have less competition and could spend more of their day carrying passengers instead of driving around in an empty car.

“There’s a better chance of drivers getting better trips,” said Jacky Lin, who has driven for Uber for more than a year and is part of another driver group called the Independent Drivers Guild.

Lyft, the second most popular app, has joined Uber in opposing the cap and says that nearly a quarter of its drivers could leave because of routine turnover, leading to a shortage of drivers over the next year if a cap is adopted. Lyft’s leaders say the city declined an offer from the ride-hail companies to establish a $100 million fund to help taxi drivers in exchange for dropping the cap.

“The bills as drafted didn’t really do anything to address the people who are in the most trouble right now, which are the taxi drivers with the underwater medallions,” Joseph Okpaku, a Lyft vice president, said in an interview. Uber has sent emails to its riders urging them to oppose the cap, arguing that it would raise prices and lengthen wait times for passengers. The cap would raise rental costs for Uber drivers who lease their vehicles and create a more restrictive leasing arrangement for drivers, said Josh Gold, a spokesman for Uber. Uber supports a separate bill before the council to set minimum driver wages.

“It boggles the mind that the council would take action to help drivers with an earnings bill while at the same time hurt drivers who can least afford to pay higher rental costs through a cap bill,” Gold claims in a statement. Uber also said that it provides transportation alternatives to riders outside Manhattan who are ill-served by public transit or have grown tired of the constant subway meltdowns.

But Carl Dauphin, a taxi driver since 1986, said it was time for the city to finally curb Uber’s growth.

“They got to do it — they have no other choice,” Dauphin said as he waited at the Kennedy parking lot before picking up a passenger. “Their back is against the wall right now.”

The problems in the industry have reached a breaking point because many New Yorkers have become fed up with constantly congested streets, he said.

“It’s not about us no more; it’s about the people in the city,” Dauphin said. “Because when you have the city crawling with traffic, everybody’s losing.”

Yousaf Latif, another longtime taxi driver, said he has started coming to the airport lot in search of a fare because Uber had taken over Manhattan.

“We don’t have enough passengers for the yellow where we can survive and stay in the city,” Latif said.

Some drivers hope the legislation will mean a return to the better wages that they earned in the past. Anila Nargis, an Uber driver, said she earned more money last year when Uber offered better driver incentives.

“It was easier for my family,” she said, “because I don’t have to run that much and then I can spend a little more time with my kids.”