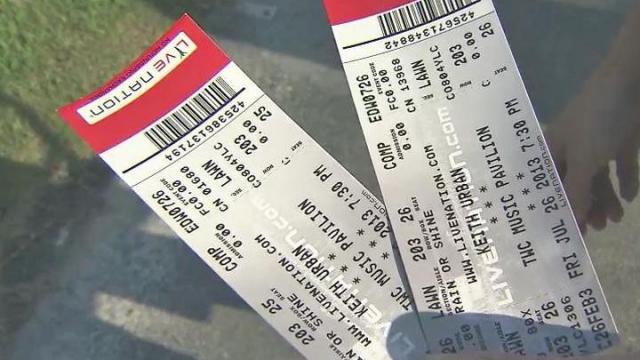 Raleigh, N.C. — Although it lowers corporate and personal income taxes, tax reform in North Carolina will bring higher taxes on entertainment next year – meaning state and local governments will take a bigger bite out of tickets for live concerts, plays and sporting events.

State and local sales taxes are replacing the privilege taxes already included in ticket prices. That could raise the cost of a $7.50 Durham Bulls ticket by about 55 cents or add an extra $4.37 on to a $60 college football ticket. For an $80 concert ticket, the increase adds up to about $5.80.

"Whatever they do to lower one thing to make you feel better, they end up getting it whatever way they want to get it anyway," said David Whitt, who was out for a movie at Mission Valley Cinema in Raleigh Thursday.

For a $10 movie ticket, state and local governments would get about 65 cents in sales tax. Though it's not clear what entertainment venues will charge to offset that cost, theater owners are not happy.

Bill Peebles, co-owner of Mission Valley Cinema, said Hollywood is already squeezing the movie industry and that it's unfair for lawmakers to single out entertainment for revenue.

"The tax is wrong," Peebles said. "I'm tired of being screwed."

Whitt said that, if the cost for going out continues to rise, something will have to give.