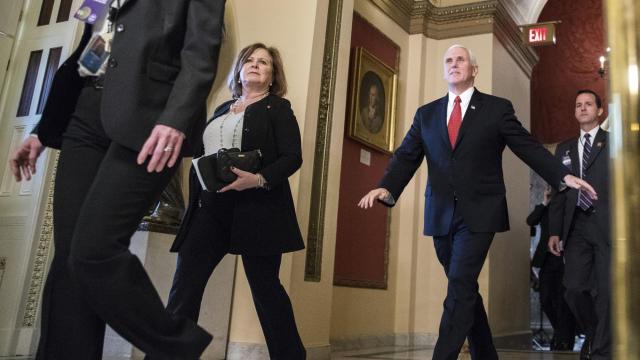 The House approved the most sweeping tax rewrite in decades along party lines, with lawmakers voting 227-203 in support on Tuesday.

The action has now moved to the Senate, which is debating the bill and is expected to hold a final vote on Tuesday or early Wednesday.

President Donald Trump is expected to sign the bill into law by Christmas.

The House on Tuesday approved the most sweeping tax overhaul in decades, voting along party lines to enact deep and permanent tax cuts for corporations and temporary cuts for individuals. The vote puts Republicans one Senate vote and one presidential signature away from their first significant legislative achievement.

The Senate was expected to approve the $1.5 trillion tax bill Tuesday night or Wednesday, clearing the way for President Donald Trump to sign it into law by Christmas.

House Speaker Paul D. Ryan of Wisconsin, speaking on the House floor, called the vote “a turning point,” saying “this is our chance, this is our moment.” When the bill passed the House, Ryan smiled broadly and banged the gavel with force as he declared victory.

Passage of the bill came over the strenuous objections of Democrats in both the House and the Senate, who have accused Republicans of giving a gift to corporations and the wealthy and driving up the federal debt in the process.

Twelve House Republicans also voted no on the bill, including lawmakers from high-tax states like New York, New Jersey and California.

Under the bill approved by the House, the corporate tax rate would be cut to 21 percent, from the current 35 percent, a move that Republicans are betting will increase economic growth. Individuals would also see tax cuts, including a top rate of 37 percent, down from 39.6 percent. But the individual tax cuts would expire after 2025, a step that Republicans took to comply with budget rules that allow them to pass the tax overhaul using a simple majority, and without Democratic votes.

Republicans in Congress moved with remarkable speed to enact the biggest tax overhaul since 1986, unveiling legislation to rewrite the tax code, marshaling support for their effort and devising a compromise between the House and Senate in under two months.

Their success was a stark contrast with their effort this year to repeal and replace the Affordable Care Act, a quest that was encumbered by internal divisions among Republicans and ultimately ended in humiliating failure. And it gives Trump a big accomplishment as the first year of his presidency nears an end.

The Action Moves to the Senate

Now that the House has voted, the action moves to the Senate, which has a much narrower majority of just 52-48.

The bill is expected to pass the Senate along party lines as well and Republicans scored two significant wins on Monday when Sens. Mike Lee of Utah and Susan Collins of Maine said they would back the bill. With Sen. Bob Corker of Tennessee also on board, the tax overhaul appears headed to passage, even without the vote of Sen. John McCain, R-Ariz., who has returned home to receive medical treatment.

If all goes as planned and no Republicans defect, the bill should arrive on Trump’s desk before the Christmas deadline the party has outlined.

Sarah Huckabee Sanders, in a celebratory mood, told reporters at her briefing that the House vote put Trump one step closer to delivering “tax cuts for Christmas.”

She again said that the president would not release his tax returns, the only way that experts can determine precisely how the tax bill would impact his personal finances. The tax package, on the surface, appears hugely beneficial to the Trump family. It continues many favorable tax preferences for commercial real estate that were curtailed for other industries, cuts the top income tax rate from 39.6 percent to 37 percent, and doubles the inheritance that Trump’s children can shield from taxation, to $22 million. Protests Erupted in the House Gallery

Capitol Police escorted a whole row of protesters out of the House chamber during the debate. Protesters yelled, “kill the bill, don’t kill us” and “shame, shame, shame.” Two additional protesters piped up during Ryan’s speech, one questioning his ability to do math.

The Debate Was Largely a Sideshow

The bill is done and dusted and while the House and Senate allow for debate on the bill ahead of the vote, it will not alter the bill’s content or trajectory.

Republicans are expected to continue promoting the benefits of the tax cut as helping the middle-class while Democrats will continue to assail the bill as a gift to corporations and the wealthy.

Several changes in the legislation were made last week when the House and Senate versions were reconciled.

The Tax Bill Is Still Unpopular

Republicans might be preparing to celebrate the passage of their tax bill, but everyday taxpayers are not popping the Champagne bottles just yet.

A new poll from CNN and SSRS found that the tax legislation continues to be unpopular with the general public, with 55 percent opposing the proposals and 33 percent supporting them. Opposition to the bill has jumped by 10 percentage points since early November.

More people think they will be worse off after the tax bill is signed into law, and a majority of people think the tax cuts will favor the rich rather than the middle class.

The survey, conducted from Thursday to Sunday, queried 1,001 adults by landline and cellphone.

Republicans Say People Will Learn to Love the Tax Bill

Ryan dismissed polling that suggests the tax bill is unpopular and attributed skepticism about the legislation to pundits spreading untruths on television.

He said that he was confident that once taxpayers saw more money in their paychecks and enjoyed the benefits of a simpler tax filing system, they would learn to appreciate the merits of the tax bill.

“Results are going to make this popular,” Ryan said at his weekly news conference.

Not all conservatives are jumping for joy over the prospect of tax cuts for Christmas.

The Club for Growth said on Tuesday that the $1.5 trillion tax bill Republicans are poised to sign “falls short of pro-growth expectations.”

The group wants Republicans to try again next year with a focus of lowering taxes for pass-through businesses, eliminating the estate tax completely, fully repealing the alternative minimum tax and getting rid of the rest of the Affordable Care Act’s taxes.

“There’s no reason we have to wait another 30 years to enact additional reform,” said David McIntosh, president of the Club for Growth.

Some Republicans from High-Tax States Will Vote No

The final House bill passed without support from 12 Republicans, all of whom also voted against the original House bill. Those voting no on Tuesday included 11 Republicans from the high-tax states of California, New York and New Jersey, where constituents could see their taxes go up because of a cap to the state and local tax deduction, known as SALT. The Senate and House bills both capped SALT at $10,000 and restricted it to deducting property taxes only.

The final tax bill still contains a cap of $10,000 but allows individuals to use that deduction for property taxes as well as either income or sales taxes. But the change was not enough to win over many of the Republicans who voted against the House bill given they could be vulnerable to losing their seats if constituents feel a pinch from higher taxes.

The list of House Republicans who voted no on the bill includes:

The Wealthiest Still Benefit the Most Under Tax Bill

The final tax bill would reduce taxes on average by about $1,600 in 2018, increasing after-tax incomes 2.2 percent, with the largest benefit going to the wealthiest households, a new analysis finds.

The Tax Policy Center, which analyzed the final bill, said taxpayers in the bottom quintile, with less than $25,000 in income, would get an average tax cut of $60, or 0.4 percent of after-tax income.

While the bill has changed several times since it originally was introduced in the House and Senate, the basic financial impact remains the same, writes Howard Gleckman, a senior fellow at the Tax Policy Center.

“Most households would get a tax cut at first, with the biggest benefits going to those with the highest incomes. After 2025, when nearly all of the bill’s individual income tax provisions are due to expire, only high-income people would get a meaningful tax cut,” Gleckman writes.