Tasty bites and sips at TerraVita 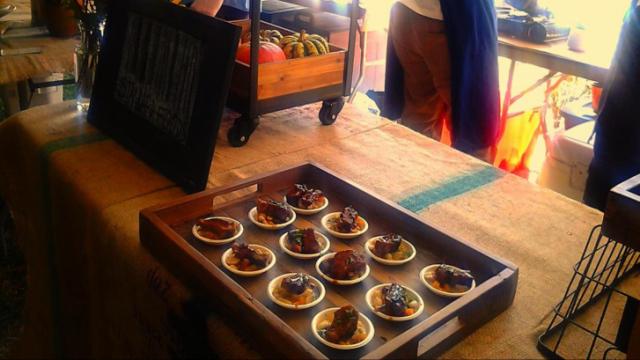 Chapel Hill, N.C. — The TerraVita Food and Drink Festival's Grand Tasting on the Green was all one would expect and more this year!

There were more than 30 vendors from around the Triangle with food and drink from local, sustainable, high-quality or organic sources. Some establishments were new to the event and others were regular favorites. It was all delicious, engaging and edifying.

I was able to get around to almost every single vendor, try something, chat and get pictures. Here are a few of the highlights from the event:

This year saw the return of a lettuce-based starter, this time from Harvest 18, with mild Bibb and pork belly, red onion, and a greens salad that was good. Chef Keith Rhodes of Catch had a Peruvian Ceviche with flounder, shrimp and crab with sweet potato, yellow corn sections and a spicy tomato-lime aioli. The lime gave a nice brightness.

There were quite a few shortib and jowl or cheek braises under the tent with fall weather taking a turn these days. One of note was from Fearrington Chef Colin Bedford and crew. They put together samples of Smoked Sous Vide Shortrib with sunchoke, ginger, brown sugar espuma and sherry. The flavors blended well and the texture of the meat from the sous vide method was incredibly tender and smooth.

Fishing Creek had a Hard Cider that was so light and dry that the palate was more like a white or sparkling white wine. Indeed, they say it’s “like champagne from apples”. They use a malic acid process for balance and ferment through the sugars completely; making it more ‘brut’ (dry) than ‘doux’ (sweet).

The layout of the event was complementary to the order of foods and beverage on each side. Next were great eats from Chef Scott Crawford’s Standard Foods, and the Ribustellos at On the Square. Then I headed over to chat briefly with Sean Lily Wilson and the folks at Fullsteam. They had some ingenious potent potables, with St. Basil deriving a hoppy reminder that was actually from five types of basil flowers and NC wheat. The Fearrington Fall brew was from Virginia Cider apples and NC rye, with Jarrylo and Cascade hops. One sip really got my attention with the unique, complex flavor.

Over at the Carolina Crossroads (Carolina Inn) table was Chef James Clark, Executive Pastry Chef Sara Thomas, and Sous Chef Bill Hartley, chatting with Master Baker Lionel Vatinet of La Farm. The folks from Carolina Inn had a savory and a sweet option. The savory was a Crispy Shrimp Boudin with Comeback Sauce (similar to remoulade). The sweet option was a Chocolate Pot de Crème with Caramel Peanuts and Bourbon Marshmallow. The chocolate caramel flavors and smooth, creamy texture was arresting. 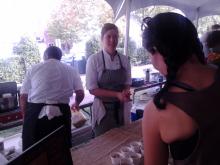 Starting down the other side of the Grand Tasting tent, there was outstanding charcuterie. Lamb sausage from was on sample with Iron Horse Farms Mint Pickled Cucumber Yogurt. Also, First Hand Foods brought a leg of 18-20 month aged prosciutto that was tender and disappearing fast.

Videri had jars of 90% dark and 50% (S. American) milk chocolate buttons, as well as a sipping chocolate to try. Urban Food Group had a gluten-free Arborio rice pudding with NC Winesap apples (a fave), crowned with caramel popcorn and toasted grains for crunch. I won’t lie. The pudding reminded me so much of my grandmother’s, that it required a minute to process that she was in fact, not actually standing next to Chefs Stephanie Nikolic and Nate Garyantes. It was warm, filling and delicious. 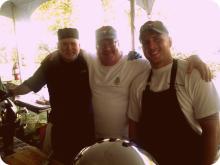 Ready for coffee again, I chatted with Reiko Tanaka from Carrboro Coffee Roasters, who took time to explain what they were doing. They used the Chemex method, which she stated “seals the steam in and maximizes the flavors,” preventing extraneous flavor leeching from traditional coffee brewing processes. Coffee buyer Scott Conary was busily demonstrating this fascinating process, while Josh Kimbrough was demonstrating bean roasting. They had several beans on hand, but they were pouring shade grown, high-altitude La Providencia of Guatemalan origin. It was mellow, slightly fruity and floral with a little spice.

Ashten’s was up next, and their yummy little mini tacos were titled “When Pigs Fly.” They absolutely did. The samples were going fast and presented on a corrugated flat ‘tray’ similar to an exhaust slat which kept them upright. Great idea!

There were so many vendors and everyone’s contribution was delicious, but rounding out the highlights on the food side were familiar community restaurants. There were salmon and tangy crème canapés from 518 West and some unique treats from The Asbury. Asbury Chef Chris Coleman put together a balanced taste of smoked catfish patè, rice and tomato salad, and pickled kale. Despite the fact that I’m not a fan of most catfish, this was fantastic.

The Vermintino and Chianti Classico were must-try samples from Wine Importers Bacco Selections LLC. The 2010 Classico had the oaky, tannic and rich flavor of the traditional method; whereas the stainless steel aged Chianti was more mellow and fruity. 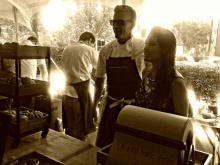 Spring House was back and Chef Grandinetti and crew were full of life and offering a Garlic Ginger Polpette with Hibachi Noodles. Chef Amy Tourquist’s family establishments brought some sweet treats; Jeremy Kerman and crew had Pear and Cranberry Pound Cake and a nice, light Sorghum Ice Cream.

There were some notable demonstrations as well. Among others, Sandra Gutierrez held a demo with brigadeiros (Brazilian chocolate bon-bons) from her cookbook Latin American Street Food. Toward closing, Craig Rogers of Border Springs Farm was holding court as an ebullient pitmaster from stem to stern, whilst demonstrating lamb barbecue technique with Royal Oaks charcoal and Smoked Bourbon Black Pepper. The crowds were paying rapt attention…and waiting. 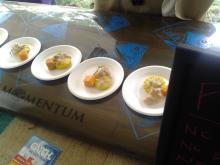