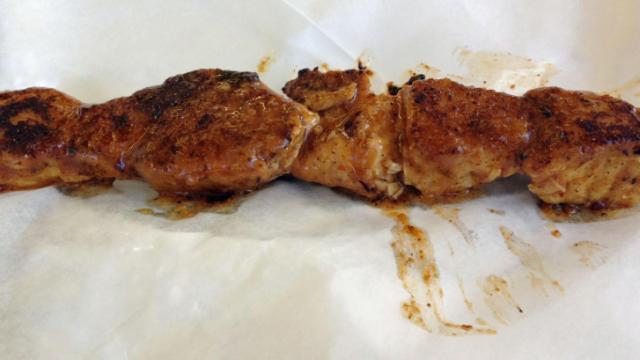 By Kathy Hanrahan and Caitlin Zanga

Raleigh, N.C. — The Out and About team is hitting the N.C. State Fair all week and tasting some of the most talked about food. For today's Taste Test, we check out Chester's Gators and Taters located in Kiddieland.

The Raleigh-based stand offers gator nuggets and a variety of kabobs (gator, chicken, shrimp and shark). Workers boasted that the Tiger shark was caught just a few days ago off of the North Carolina coast, so we figured that we would give it a try.

The stand is also selling deep fried Rice Krispy Treats topped with chocolate syrup and sprinkles. Since it is new, we had to give it a try as well.

Here are our thoughts on each:

Shark Kabob - It smelled like it was going to have a burst of Cajun seasoning, but ended up having barely a whimper of kick. The meat itself reminded us of alligator. Overall, this heavy kabob didn't really leave a memorable impression on either of us. This is fun to get if you're interested in trying exotic or strange food, but we won't order it again.

Deep fried Rice Krispy Treat - If the stick isn't strong enough to hold it, then don't offer it on a stick - that should be a rule at the State Fair. We had high hopes for this dessert - it includes one of our favorite snacks. It looked good, but when we tried to pick it up with the stick (that was inserted after it was fried) all we ended up with was some deep fried batter and a pile of mushy Rice Krispies. There was too much dough around it, and the actual Rice Krispy Treat was lost. We thought the marshmallow mix would melt and become gooey, but instead the cereal just fell apart. Without a spoon or fork, we ate this using the one stick like a makeshift chopstick. That poor Rice Krispy Treat deserved a better fate! This was one of those "sounds better than it tastes" items at the fair.