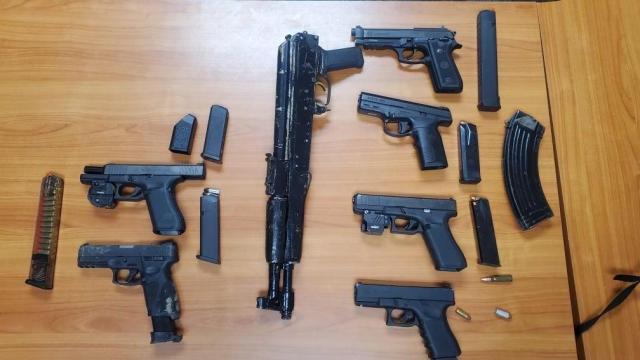 Around 11:30 p.m., a police officer was on patrol when he heard gunfire coming from the Northgate Apartment Complex. As he pulled into the parking lot, he saw a car attempting to flee the area and a chase began.

The driver didn't stop, and two other law enforcement officers from the Tarboro Police Department and the Edgecombe County Sheriff’s Office helped the officer stop the car at a nearby intersection. Four people inside the car were arrested, and a handgun with an extended magazine was seized.

In the same area, another officer stopped a second car with four people inside fleeing the scene. Three handguns and a rifle were seized.

No one was injured in the shooting, but an apartment building and several cars were damaged, police said.

Later, a K9 officer found a sixth gun that had been discarded.

Several of the people arrested were linked to a shooting on Ash Street the night before, where one person was injured.

Two men, ages 20 and 21, were charged with attempted first degree murder, felony conspiracy and discharging a weapon into occupied property.

All were being held at the Edgecombe County Detention Center.

Additional charges are likely to be filed, police said. Anyone with information about these incidents are asked to contact Captain Rick Mann at 252-641-4216 or Detective Corporal Kenny Womack 252-641-4201.