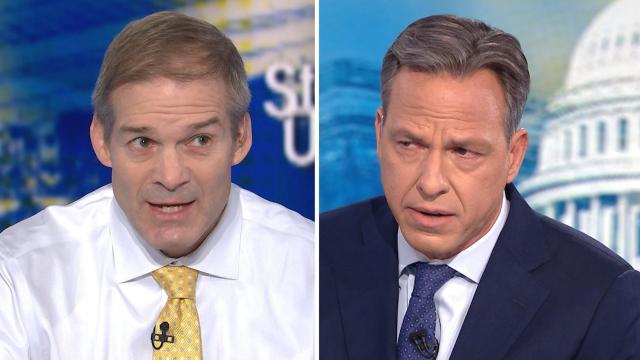 CNN — Rep. Jim Jordan, the top Republican on the House Oversight Committee, and CNN's Jake Tapper got into a contentious exchange Sunday after the lawmaker made false and misleading claims about the unfolding Ukraine drama that has led to an impeachment inquiry into President Donald Trump.

During a tense interview with Tapper on "State of The Union," the Ohio Republican attempts to give his spin on the drama, making unsubstantiated claims about former Vice President Joe Biden and his son, Hunter. Trump tried to pressure Ukrainian President Volodymyr Zelensky into investigating the Bidens, though there is no evidence of wrongdoing by either.

On Jordan's claims about the Bidens

"The vice president's son gets paid $50,000 a month and gets hired by a company in an industry he has no experience in and oh that's fine?" Jordan says, referring to Hunter Biden serving on the board of a Ukrainian natural gas company. "Try taking that message to the American people ... When they see the vice president's son getting paid $50,000 a month in a field, in an industry he has no experience in ... And then when the company that's paying that money is under investigation, guess what? Daddy comes running to the rescue. The vice president of the United States comes running in and says, 'Fire that prospector.' "

"So you're saying Joe Biden didn't tell Ukraine to fire that prosecutor? I think he did," the congressman says.

"He did, but the guy was not prosecuting anything. That was the problem," Tapper replies.

"Did Joe Biden tell him to fire the prosecutor?" Jordan asks again.

According to CNN's fact check, the Obama administration, American allies, the International Monetary Fund and Ukrainian anti-corruption activists, among others, had all made clear that they were displeased with the performance of Viktor Shokin, who became prosecutor general in 2015.

Shokin was widely faulted for declining to bring prosecutions of elites' corruption, and he was even accused of hindering corruption investigations. His deputy, Vitaliy Kasko, resigned in February 2016, alleging that Shokin's office was itself corrupt.

"Was that prosecutor looking into Burisma, the company that had hired Joe Biden's son for $50,000 a month?" Jordan says.

"According to the Ukrainians, that investigation was dormant at the time," Tapper said, adding later: "If you want to push a law saying that the children of presidents and vice presidents should not be doing international business deals, I'm all for it. But you're setting a standard that is not being met right now."

Trump has repeatedly claimed Shokin was investigating Hunter Biden. According to CNN's fact check, there is no public evidence that Hunter Biden was ever himself under investigation. The investigation, as far as we know, was into the business activities of Mykola Zlochevsky, who owned a natural gas company, Burisma Holdings, for which Hunter Biden had sat on the board of directors since 2014. The United Kingdom had begun investigating Zlochevsky before Hunter Biden joined the board.

On Jordan's claims about the whistleblower

During his interview with Jordan, Tapper also fact-checked the congressman on his statements about the whistleblower, whose complaint about Trump's communications with Zelensky revealed this week that the White House took extraordinary steps to conceal the call.

"Two things you look at to determine the credibility of a so-called whistleblower when they're coming forward," Jordan says. "First, did they have firsthand knowledge? And second, what is their motivation? Was there some kind of bias? This individual has problems on both of those counts. He had no firsthand knowledge, he heard something from someone who may have heard something from someone."

"No, no, his sources were firsthand sources," Tapper replies.

"But he has no firsthand knowledge. And second, he has a political bias. That should tell us something about this guy who came forward with this claim," Jordan says.

"You know as well as I do, that you do not need to have firsthand knowledge to be a whistleblower," replies Tapper.

"Well, you don't now because they changed the form. You used to," Jordan contends.

"There's no evidence of that. And we looked into this," Tapper says. "It has never been true that you need to have firsthand knowledge to be a whistleblower."

"But it's something that's critical when you're assessing if they're credible. That's a major determination," Jordan replies.

CNN reported earlier this month that the whistleblower didn't have direct knowledge of the communications that partly prompted the complaint to the intelligence community's inspector general, according to an official briefed on the matter. Instead, the whistleblower's concerns came in part from learning information that was not obtained during the course of their work, and those details have played a role in the administration's determination that the complaint didn't fit the reporting requirements under the intelligence whistleblower law, the official said.

The whistleblower's attorney, Andrew Bakaj, had no comment when asked about the claim that the individual did not have direct knowledge of the communication in question.