Tally of the Dolls 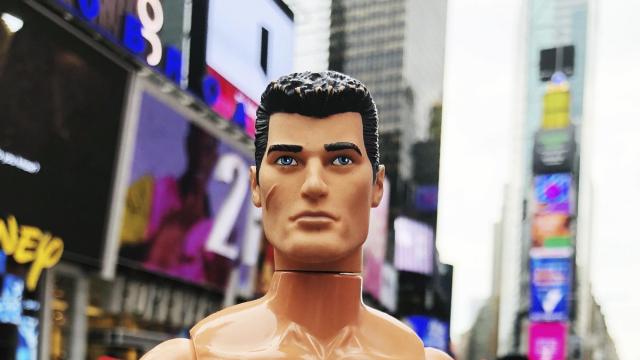 It began at the breakfast buffet. He was impossible to miss: ruggedly handsome, his chiseled cheek marred only by a single, stretching scar hinting at a rough-and-ready past. I sensed a military background, his clothing-optional approach allowing me the full scope of his 16-pack abs.

Nursing a coffee with learned nonchalance, Joe, a Marine turned media intern, was the talk of our table. It was as if we had all forgotten he was only 6 inches tall and entirely plastic.

But @joe_the_intern only had eyes for one woman. In fact, I was meeting him on one of their many vacations, this time at a luxury resort in Mexico. Later, by the pool, Simone Paget bent his limbs to her will for an après-swim shoot. From a small purse, she produced his miniature towel, miniature Cancun guidebook and miniature beer bottle.

Whole swaths of society, not just children, have long been fascinated with small things. Puppies and Shetland ponies inspire coos. Babies’ accessories are fussed over. Some adults collect things like wee Chanel purses or itty-bitty scissors.

There are accounts dedicated to dolls’ hair accessories, their wigs, their shoes. The Paris Review even called attention to an Instagram cataloging dolls’ ill-fitting and unappealing suits.

Paget, 38, a Canadian who writes about sex and relationships, is not necessarily the type of person that springs to mind when you think “ADC” (adult doll collector), but after acquiring a G.I. Joe via an acid-tripping partygoer after a bad breakup, she has spent countless hours fabricating @Joe_the_Intern’s elaborate back story (he suffers from PTSD and was formerly homeless, living in a Burger King lost-and-found box), traveling with him, and art-directing him for social media.

“I now use him as a litmus test,” Paget said. “People either think it’s hilarious or totally weird, but it’s a two-for-one deal: You get me, you get the doll photography.”

While Joe’s follower count has not yet reached her six-figure target, Paget’s investment is returned, she said, in catharsis. She cited one post in which Joe was stood up on a date, something that had happened to Paget herself weeks before. “He is a doll, but for me he shows the possibility of survival,” she said. “That you can move through difficult circumstances and reinvent yourself as an adult.”

Similarly Ellen Jones, who lives in Belgrade, Serbia, says that through @Ellen_thebarbie she can live out her “dreams.” Barbie Ellen is older than human Ellen, and everything we hope to be at age 22: a model-artist with a live-in boyfriend, golden retriever and 11,000 followers. Jones is still surprised that so many “real people” are fascinated by her Barbie’s life.

A cousin across the globe is Julia Renkert’s @mittenstatebarbie in Michigan. An upbeat yet “sassy” graphic designer with red hair and glasses, the doll’s character is loosely based on Renkert herself.

With thousands of fans and several spinoff accounts depicting the doll’s husband and friends, Renkert, 29, has no trouble justifying spending her entire Memorial Day weekend making a mini chicken coop or binge shopping for Mattel’s latest collections. “People have told me that they love following my story and it brings them joy on what would otherwise be a stressful day,” she said.

There can be profit in this joy. Jana Sanderson and Luise Miller, popular “lifestyle bloggers” and best friends, are often re-'Grammed by brands for promotional purposes. They are the creations of Eva-Julie and Désirée Remmy, two German sisters and students who founded the pair’s accounts in 2015 and make all their clothes, accessories and props from scratch.

One pivotal scene for the dolls (such as a trip to Coachella or a baby shower) can take weeks of preparation, with the destination wedding of Jana and her husband, Sam, requiring a beach volleyball court and 50 more dolls.

The Remmy sisters said they have little interest in Instagram fame and its monetary rewards. Their goal, they said, is simply fabricating an existence so realistic that upon first glance, Jana and Luise appear to be real people.

“You have to fully comprehend how life functions if you are a mother,” said Eva-Julie, who is 17. “You have to put yourself inside of another person. Behind a picture is so much invisible work.”

Not surprisingly, a plethora of niche specialists has surfaced to help. Janelle LaFond, a doll stylist in Tampa, Florida, sources tiny looks from around the world, including China and Croatia, joking with friends that her toys (each of whom requires three hours of handling daily) have more clothes than she does.

“I spend quite an absurd amount of money on handmade clothing for my dolls,” said LaFond, 31. “I have a certain aesthetic I like to put out there, and that’s that they portray ‘fashionistas.’ ”

But despite the growing number of toy influencers — likely encouraged by the original Barbie’s meaty fee per partnership post — very few have managed to turn so-called Dollstagramming into a day job. After devoting the past two years to photographing American Girl dolls, Sydney Rose Paulsen, 20, is one. With her mother, Paulsen works with brands to create American Girl content, sometimes spending up to eight hours on a shoot.

“I’m sure my dolls are counting the days until they’re walking the red carpet!” she said.

Paulsen has even found herself advocating doll rights with an undisclosed manufacturer, hoping to fast-track the removal of “permapanties” (the underwear that dolls are sewn into).

“My mom and I both spend hundreds of dollars and thousands of hours so they can live comfortably,” she said. “Most of the time they’re pretty chill, but sometimes one will start demanding something and it’s important to give them what they want before a full-on riot ensues.” Her dedication has delivered its fair share of awkward moments. Paulsen said she was almost arrested after an X-ray at Los Angeles International Airport identified a prop gun in the carry-on holding her many dolls and accessories. It was confiscated. She was also reprimanded by security at the Met for posing her doll in front of a piece of art.

“I don’t think many humans have reacted in awe when I’ve said I’m a doll photographer,” Paulsen said. “I think most believe my business is a lucky fluke. Maybe part of that is true, but that luck sure has hundreds of 14-hour days holding it up.”

Maree was determined to create her Barbie mini me: a “curvy gamer nerd,” she said, although, like many influencers, she eventually tired of the pressure to continually update her wardrobe and create increasingly original scenarios.

“I still get messages and comments asking when new content is coming out, or if our dolls ‘want to be friends,’” Maree said. “She is definitely due for a comeback.”

LaFond, the stylist, said that when a doll stops posting, others will notice and reach out. “A lot of people in the community deal with mental health issues, but having a strong support system that shares a common interest helps a lot of us get through it,” she said. “It’s a togetherness that spans across the world.” As an outsider, it’s easy to make fun of Dollstagrammers. Surely these people have a creepy, perhaps even unhealthy obsession with dolls? They’re seeking Instagram fame, but incapable of achieving it in their own right. These are women without children or romantic love, channeling their maternal instincts into plastic figurines.

But when this reporter asked Eva-Julie and Désirée Remmy if they ever find themselves cringing during public photo shoots, Désirée responded: “No, we have never had any embarrassing moments. For us, this is really high-quality artwork, there’s nothing to be ashamed of.”

“It’s escapist,” Paget said of her work with @Joe_the_Intern. “When we’re bombarded with perfect bodies and really contrived stuff already, I think there’s something really funny about imagining a toy in the world.”

And that world “is pretty messed up and ugly,” she said, “so I think there’s something kind of delightful about miniature things that exist in their own little sphere. It makes sense because the world really is chaotic.”