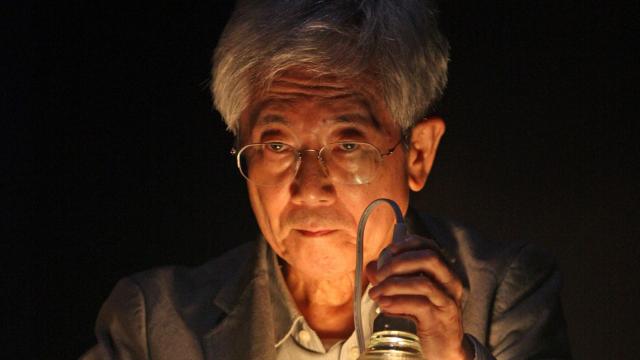 Takehisa Kosugi, an avant-garde composer who was an accomplished violinist but was just as likely to play bicycle spokes or inflatable balls in his innovative explorations of the sonic landscape, died on Oct. 12 in Ashiya City, Japan. He was 80.

In a long career on the cutting edge, Kosugi’s interests were in found sounds, in creating events rather than traditional musical works, in examining all parts of the acoustical spectrum including silence, in challenging audience expectations.

One early piece, “Micro 1,” consisted of him crumpling a large sheet of paper around a live microphone; the audience was then invited to listen to the paper uncrinkle as it strove to return to its original state.

“There is a radical integrity to everything he did that stayed razor sharp,” Jay Sanders, who curated “Takehisa Kosugi: Music Expanded,” a 2015 retrospective at the Whitney Museum of American Art, said by email. “He reframed everyday actions as mesmerizing music events that pushed the philosophical edge of his whole field into new frontiers.”

Takehisa Kosugi was born on March 14, 1938, in Tokyo. He studied music at the Tokyo University of the Arts, graduating in 1962. While still a student he was among the founders of Group Ongaku, an improvisational music ensemble that experimented with multimedia approaches and explored the idea that physical actions could constitute music.

Kosugi became identified with Fluxus, a movement that defined art in terms of experiences as well as traditional forms like paintings or musical compositions. His early works included “Events,” a set of 18 instructional cards now in the collection of the Whitney that set forth specific actions. A similar piece, “Theatre Music,” was included in “Fluxus 1,” a sort of compilation notebook created in 1964; it consisted of a card imprinted with a spiral of feet and the words “Keep walking intently.”

Kosugi also created performance-based works in this period, and in 1967, assisted by two other artists then building their avant-garde reputations, Nam June Paik and Charlotte Moorman, he offered some in a program called “Music Expanded” (a title later appropriated by the Whitney for its retrospective) at Town Hall in Manhattan.

In one piece, “Instrumental Music,” a spotlight threw a silhouette of Moorman, a cellist, onto a screen and Kosugi tried to cut out the silhouette with scissors. Another piece performed that night, “Slow Anthology,” a collection of light and sounds that the program said was composed from 1964 to 1967, did not impress Donal Henahan, a critic for The New York Times.

“By its dating it appears it took Mr. Kosugi three years to compose this work,” Henahan wrote, “but one could learn to hate it in far less time.”

Barbara Moore, a Fluxus historian, described these early works as “more what is now called performance art, in his case with strong visual components implying a musical connection rather than making it explicit.” Kosugi’s later performances, she said by email, were at least somewhat more conventional, with him and others playing instruments or creating electronically amplified sounds from various sources.

Although Kosugi appeared on his own at numerous festivals and other events, many of his compositional efforts were in service to the Cunningham troupe’s dances. He first composed for the company in 1977, and he worked alongside and was influenced by John Cage, Cunningham’s longtime collaborator and partner.

His works for the troupe were a long way from the musical accompaniment used in conventional dance. They might incorporate dropped objects, electronically created noise and more.

“Imagine the sound of a live microphone, wrapped in aluminum foil, dragging behind a garbage truck that’s driving along a rugged shoreline as ocean waves crash nearby,” Brian Mackay wrote in The State Journal-Register of Illinois, reviewing a 2009 performance of the Cunningham troupe at the University of Illinois at Urbana-Champaign. “Now imagine it going on for 80 minutes.”

To others, though, Kosugi was liberating the idea of music from relatively narrow boundaries.

“I think what he was trying to do was absolutely bring music right up to the present, to dismantle its rules completely,” said Sanders, who is now executive director of Artists Space in New York. “It’s almost a kind of productive nihilism to retrofit music as visceral sonic event and visual bodily act.”

Kosugi’s survivors include three brothers and his longtime manager and partner, Takako Okamoto.

For the Whitney retrospective, Kosugi, then in his late 70s, was an active participant, displaying a stamina that impressed Sanders.

“He worked incredibly hard, bringing much electronic gear from Japan, and working with collaborators to perform the more physical action works that he could no longer do himself,” he said. “As much as I know his work, I was shocked by how powerful and earth-shattering every piece was.”