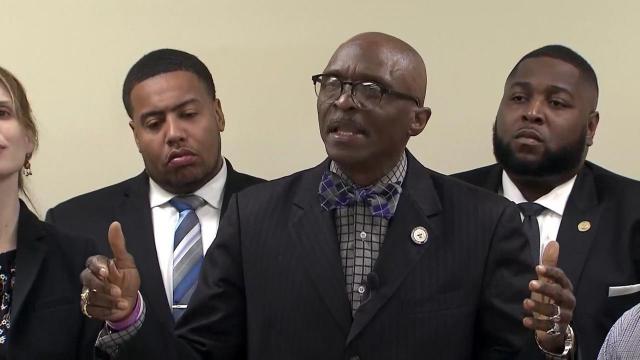 EDITOR'S NOTE: Rev. Dr. T. Anthony Spearman is president of the North Carolina NAACP. This is the text of the remarks he presented Monday to the N.C. General Assembly's Joint Legislative Elections Oversight Committee.

I stand here today arm and arm with people of conscience and good will defending democracy in the state of North Carolina. Together, we demand this illegal N.C. General Assembly:

Put simply: The photo voter ID constitutional amendment that was passed earlier this month is invalid. The General Assembly should take no action to implement it until the courts can rule on its constitutionality.

As the chair of this committee knows, the current General Assembly is a creature of racist maps. This leadership caucus of the General Assembly came to power because it successfully implemented one of the largest unconstitutional racial gerrymanders the federal courts have ever seen.

This past November, the people were finally given an opportunity to vote under fair legislative maps and they broke the stranglehold that the unaccountable, extremist leadership caucus have had on this unconstitutional body for too many years.

In a short few weeks, the newly-elected General Assembly will be seated and “The People’s House” will be out of the control of an unconstitutional legislature for the first time since 2012.

But instead of giving way to the new legislature, the same leadership caucus has convened yet another infamous “special session,” to do more damage on the people of this state while you still can.

A racist photo voter ID amendment has long been a part of this extremist General Assembly’s plans to suppress the voices of people of color and illegally keep control for itself.

This General Assembly, which itself is a result of racist tactics designed to limit the power of Black voters, has already passed a photo voter ID law. That law was struck down by the federal courts as intentionally racially discriminatory.

The U.S. Court of Appeals for the Fourth Circuit said it best in its historic 2016 decision declaring that the last iteration of the photo ID requirement “target[ed] African-Americans with almost surgical precision [and was] enacted with racially discriminatory intent.”

This General Assembly remains tainted by that same racially discriminatory intent that motivated it in 2013 as it convenes the special session this week to finally realize a discriminatory goal of suppressing the voices of people of color.

The motivation has not changed since the last time the courts struck down this usurper body’s previous attempt to enact a racist photo voter ID law. The General Assembly’s feigned rationale for such a law remains nothing but a pretext for more devious, unconstitutional motivations.

A photo ID requirement does nothing to address the state’s most pressing security issues. It has nothing to do with improving the reliability of voting equipment, safeguards for voter data, or protections against foreign interference. Research consistently shows that irregularities in voting are vanishingly rare, and the types of irregularities that this amendment would prevent are even rarer.

Voter ID is intended to silence voters of color. The evidence is overwhelming.

For example, here in this state in the 2016 primary, North Carolina voters had to overcome a photo voter ID requirement to access the polls because the Fourth Circuit had not yet struck down this General Assembly’s previous photo voter ID law. In that election, although African Americans made up only 23 percent of all voters, they were 34 percent of voices that could be documented as silenced by the Voter ID law.

This rushed process is indicative of how little respect this General Assembly has for voters of color.

The process afforded here is breathtakingly cursory and rushed, directly following the Thanksgiving holiday and in the 11th hour of this General Assembly’s waning days in office.

In sum: This unconstitutionally-constituted usurper General Assembly convenes this week in the absolute last days to use the power it stole from the people through racist maps to pass racially discriminatory photo voter ID enacting legislation.

In response, we say: please, end this effort. You have legislated enough suffering and discrimination upon the people of this state. You are an illegitimate body and we, the people, do not authorize you to act on our behalf.

We ask that you not use these last days of your unlawful time in “People’s House” to make another attempt to put in place a plan of enacting a discriminatory photo ID that will suppress the vote of people of color.