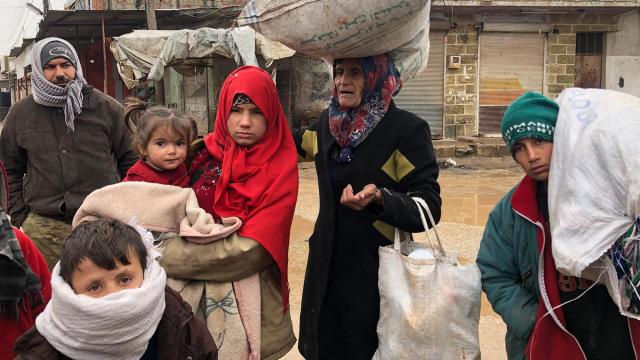 CNN — It's freezing cold and the kids don't have proper shoes, but the elderly Samar couldn't risk it. Overnight, the bombings got too close.

They fled their village in a panic, the older children carrying the little ones, walking for seven hours just to get away. The youngest children are shaking, their cheeks are bright pink from the cold.

Finally, a van stops -- it's a godsend. The family piles in with their hastily filled bags containing just a change of clothes, which they managed to grab in the darkness as they ran.

In the last two months, more than 832,000 people have fled the last opposition-held territory in Syria in the wake of a relentless air campaign and a swift ground offensive by the Syrian regime and its Russian backers. Tens of thousands of people are still on the move. Nearly 700,000 of the newly displaced are women and children, according to the latest UN figures.

There is plenty of international condemnation, but little action to relieve the situation in Syria's northwestern province of Idlib and the surrounding areas.

The van takes Samar and the six kids in her care to her sister-in-law's house in a village close to the town of Atarib. It's not far enough, but for now it will have to do.

"I don't feel better here," Samar told CNN. "We need to leave but we need to try to figure out transport or something because if we try to walk it will be impossible."

Just a few doors down, Umm Abdo's kids wait outside, bundled up in their winter coats as she finishes loading a truck with mattresses and blankets. The airstrikes are getting too close. It's time to leave.

"We are only taking a little, just some clothes, only what we need," Umm Abdo said.

She walks into the bedroom one last time and pulls out the kids' toys from the closet.

Eight-year-old Dima grabs her favorite -- a pink teddy bear called Hamze. The youngest, two-year-old Betoule, grabs a yellow chick. Ten-year-old Abdelbased keeps his hands in his pockets -- he is too old to play with stuffed animals anyway.

They fled their home two years ago, but had created new memories and a sense of stability in this house. The kids were in school and they had friends.

Umm Abdo tells the girls to put the toys back. They don't protest or hesitate, seemingly hardened well beyond their years, and head out to the truck.

After a final look around the house, Umm Abdo walks out, locking the front door behind her. It's an incredible act of optimism as the Syrian regime onslaught continues and the future looks bleak.

There are no good options for the population as the opposition enclave disintegrates.

In the short term, many say they would prefer a Turkish protectorate that would let people go back home. The nightmare scenario is for the Syrian government to take back control and reimpose its brutal regime of massacres and mass detentions.

For its part, Turkey has upped its military presence, sending in hundreds of armored vehicles and tanks in an effort to stop the government advance.

Thirteen Turkish soldiers and one civilian contractor have been killed in Syrian government attacks over the last two weeks, and Turkey has responded by shelling regime positions with a warning that they will respond even more harshly if their soldiers come under fire again.

Officials in Ankara say they will no longer tolerate aircraft targeting the civilian population in Idlib, but it's unclear how Turkey can end the airstrikes given that the Syrian regime and Russia control the airspace.

The Syrian government's official line over the last nine years has been that they are fighting "terrorists," even as they have hit civilian infrastructure, targeting hospitals, clinics and schools.

In Idlib, Hayat Tahrir Al Sham (HTS), a reincarnation of the al Qaeda-affiliated Jabhat al-Nusra, has been the dominant force. But that dynamic is changing with Turkey's increased military footprint in the area, according to Omer Ozkizilcik, the editor-in-chief of Suriye Gundemi, a Turkish analysis center focused on the Syrian civil war, and an analyst of the pro-government think tank SETA.

"HTS is no longer the dominant force in Idlib but the Turkish Armed Forces (TAF)," said Ozkizilcik.

"Even without TAF, the internal balance of power has changed in favor of Turkish-backed rebels, who were forced out when extremists returned to Idlib."

Umm Abdo drives off to join the thousands of others on the jam-packed roads out of Idlib, unsure of where they are headed or when she will be able to put her children to sleep in peace.

It's a race against the Syrian government advance from the east, which threatens to choke off access to a nearby Turkish-controlled safe zone inside Syria. The Turkish border is open for aid coming into Syria, but closed to people who want to leave.

Turkish officials have been warning for months that they cannot handle a new influx of refugees into the country, but the Syrian regime's offensive in Idlib could push nearly 3 million more people across the border into a nation that already hosts almost 4 million Syrian refugees.

Souad watches the two-lane road outside her tent congested with desperate people fleeing, crammed into cars, trucks and vans. Tears roll down her face. "Is this what has become of us, oh Lord?" she asks no one in particular.

She may have to pack her family and move again, but for now she looks on in grief. The last opposition enclave is crumbling around her. The sound of artillery sometimes pierces through the cacophony of honking horns, as vehicles carrying the possessions of desperate people struggle to leave.

It is a scene that plays out on every road leading out of the area.

A father clutching his sick daughter says they've been on the road for two days trying to reach safety. Where is that? He points ahead. "The camp," he says, before rushing off.

Once independent from each other, the camps along the border with Turkey have sprawled into a massive city of semi-permanent structures. More than one million people, displaced from nine years of fighting, already live in the ever-expanding camps, which provide some semblance of security even as the freezing temperatures take their toll.

Sitting in the corner of the family's tent, Samiya recalls the night when temperatures dipped below freezing as the last of their fuel ran out. Her seven-month-old baby, Abdulwahab, was warm when she changed his diaper and fed him that evening before putting him to sleep for the night.

Just after dawn, she woke up to the screams of her older kids. Abdulwahab's little body was as cold and gray as the cement their tent sits on.

"I touched him and he was icy," Samiya said. The family doesn't own a phone, so there are no photos of Abdulwahab alive. They rushed the boy to the closest doctor, who told them he died of the cold, according to Samiya.

"It's a hard thing, for a mother to wake up and find her son dead ... I wouldn't wish it on anyone," she said. "I thought the children would be safe here."

A short drive away, in a muddy makeshift camp near Sarmada, the conditions are miserable but a cheer goes up as people point to the sky and yell: "Regime aircraft down!"

In the distance there is an orange ball of fire falling through the sky, leaving a trail of black smoke as people look on, mesmerized.

It's one Syrian government helicopter out of five that were in the air, and it's been shot down by opposition fighters, according to activists from the area.

But it's a small victory. Syrian government forces have captured most of the M5 highway that runs through the opposition-held area, which has shrunk to nearly half the size it was in 2018, when Turkey brokered a deal to set up military outposts to observe a ceasefire.

Back then it was called a de-escalation zone, but now schools and mosques have been converted into shelters, and families cram into tents as more relatives arrive. The physical claustrophobia is palpable, but it's also psychological.

Obaid proudly shows us a photograph of his home, a large farmhouse surrounded by agricultural land. He apologizes for the mud outside, and for the conditions in his tent, as an app on his phone keeps buzzing with warnings about where planes are dropping bombs.

He found out his brother Saad died in regime custody; an acquaintance recognized him among more than 28,000 photos of bodies, smuggled out of the country by a Syrian army defector codenamed Caesar. Obaid's sorrow is deep, and the loss of his brother to such brutality is still a shock.

"For me even if there was a ceasefire and the regime is in control of the area and they said there would be reconciliation, I can't trust that," he said.

"If you go back you can be detained and spend your life in jail or worse."

For many in Idlib, death is preferable to life under President Bashar al-Assad.

"I would rather die than ever go back to the regime," said Obaid.

In freezing cold tents, on congested roads, it is a sentiment that echoes across Syria's last opposition enclave.