Durham, N.C. — An anti-Semitism symbol of hate was found was on the Duke University campus for the third time this semester.

On Monday, a swastika was painted over a mural to honor the victims of the Pittsburgh synagogue shooting on the university’s "graffiti bridge" on East campus.

"I can't wrap my head around it," said Rachel Radvany, who is Jewish.

Keren Amkraut is one of the Jewish students who painted the original mural - a Star of David.

"It was terrifying," she said. "I was just angry and upset and a little bit scared." 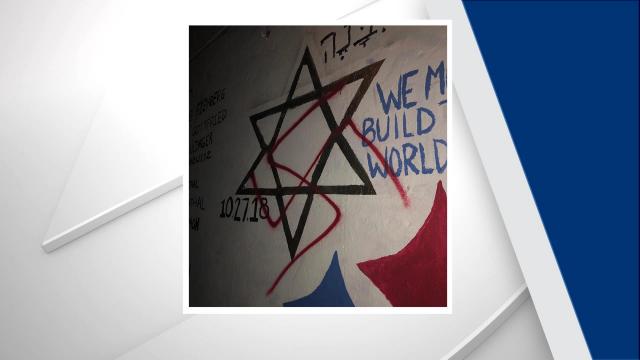 Duke facilities quickly painted over the swastika, but the pain is still there.

"It's just a mixture of disgust, sorrow, but also kind of not really surprising anymore because this has happened what, three times now since we've been here," said Brandon Lindsey, a freshman at Duke.

Duke's Vice President Michael Schoenfeld, who is also Jewish, said although this is the "free expression" bridge/tunnel, hate speech will not be tolerated.

"What we all woke up to this morning was a disgusting and cowardly act of vandalism," he said.

Darby Heflin, a freshman, agrees, saying there is no place for hate in Durham or at the school.

"It just hurts me because that's not what we are," she said.

Another student said the incident on Monday is an issue of safety for Jewish students.

"Not only is this an issue of safety for Jewish students, but it is also a marker of the rising tide of anti-Semitism in our country and around the world," said Dorothy A.

Duke's president sent out a note to students that said he is arranging a meeting between Jewish leaders and public officials. He also said that the university will install additional surveillance cameras at the bridge.

Duke Police are investigating who is responsible for the swastika.