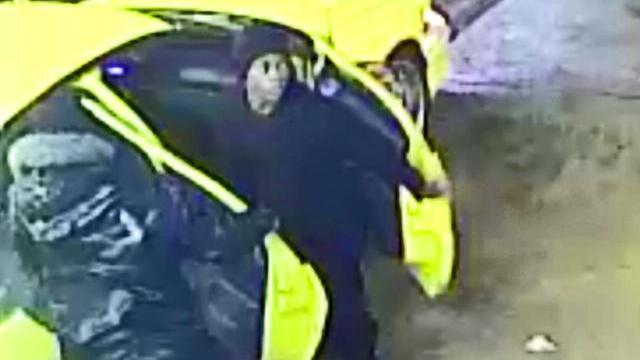 Fayetteville, N.C. — Investigators are asking for help in identifying two suspects who went on a robbery spree Friday night.

The first incident was at Slow Joe Customs at 539 Bragg Blvd. on Jan. 10 at around 8:47 p.m. The suspects entered through an open garage bay door and demanded money from employees. One suspect was armed with a handgun, police said. An employee escaped through a rear door and nothing was taken from the business.

Just over an hour later, a person was robbed in the parking lot of the YaYa Food Mart at 3122 Murchison Rd. at approximately 10:05 p.m. Two suspects approached the victim in his vehicle and demanded money. One suspect used a handgun to strike the victim in the head, police said. The victim fled from the parking lot and the suspects stole his 1993 yellow Chevrolet Caprice. The vehicle was later recovered on the 2500 block of Murchison Rd. The suspects were gone when officers arrived.

About 12 minutes later, a man was robbed in the parking lot of the Cumberland Food Mart at 431 Cumberland St. Two suspects approached the man and forced him to the ground. While one suspect held the victim at gunpoint, the other took money from his pants and searched his vehicle, police said.

The final incident happened at approximately 1:13 a.m. at the Kangaroo Convenience Store at 1135 Pamalee Dr. Two suspects approached a man in the parking lot and demanded money. The victim fled from the suspects without surrendering any property.

Police described the suspects as:
• Black males
• 20 to 25-years-old
• Suspect 1 clothed in a black Jacket with fur around the hood and dark jeans
• Suspect 2 clothed in a dark shirt, dark jeans and a black toboggan

Investigators ask for anyone with information about the robberies or the identity of the suspects to call Detective E. Culver at (910) 237-8553 or Crimestoppers at (910) 483-TIPS (8477). Crimestoppers information can also be submitted through their anonymous online tip sheet.