Wilson, N.C. — Wilson police were searching Thursday for the person responsible after a 9-year-old boy was shot in the face Wednesday night, authorities said.

At the home in the 1700 block of Stantonsburg Road, bullet holes were visible in a wall, and a window was broken. Surveillance video from a neighbor's porch captured the sound as a cluster of shots rang out.

A woman who answered the door said the child, who goes by the nickname of "Toot," was struck in the head. Neighbors saw him being loaded into an ambulance, blood coming from his head. 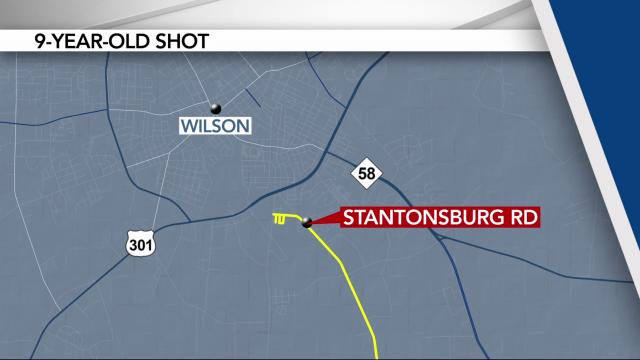 "My heart pours out for him," said Nikata Cox. "It really tore me up, 'cause that could have been my child, my daughter or son."

Authorities said the shooting happened about 9:15 p.m. The boy suffered a gunshot wound to the eye and was being treated Thursday at a local hospital.

Wilson police Sgt. Steven Stroud said the boy's injuries were not believed to be life threatening, and the woman said he was "doing fine."

She said the boy did not live at the house, but Ricky Cox said he was a regular playing in the neighborhood.

It was not immediately clear whether he was shot on purpose or was an innocent bystander.

Neighbors on Stantonsburg Road told WRAL News it was the second shooting in the area this week, and some pointed the finger at gang activity.

Wilson police asked anyone with information to call investigators at 252-399-2323.