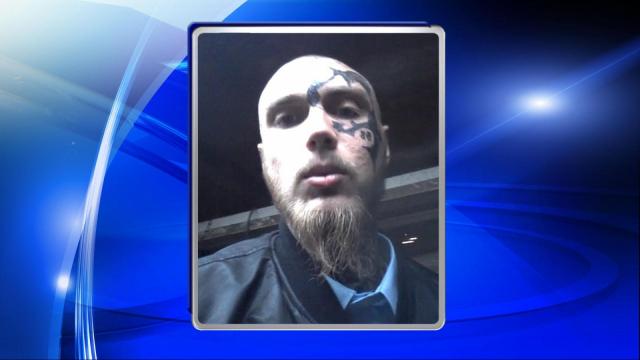 Goldsboro, N.C. — Authorities continue to search for a former Wayne Community College student who is charged with murder in the Monday morning shooting death of a longtime employee on campus.

Stancil is described as white, about 5 feet 11 inches tall with a goatee and a tattoo over his left eye. He was wearing a blue jacket. Authorities said he is considered armed and dangerous, and anyone with information on his whereabouts should call 911.

College officials said Stancil was a previous work-study student who reported to Lane. They did not say when Stancil was a student at the school or how long he attended.

After the shooting, officers flooded the campus and locked down buildings as they conducted a room-by-room search. Officers cleared all the buildings at the school, including one that was cleared by tear gas when they mistakenly thought they had the gunman isolated.

Nearby Tommy’s Road Elementary School was also on lockdown, while students of Wayne Early Middle College, located on the college campus, were advised not to go to classes. The private Wayne County Day School – with about 300 students in pre-kindergarten through 12th grade – also was on lockdown, said Melissa Watkins, a volunteer parent receptionist at the school.

Students studying in the library said they heard a single shot ring out, and they hid until police gave them the all-clear.

"I was like, 'What's going on?'" freshman Tichini Lewis said. "The lady inside the library took everybody and hid us in the office."

Freshman Johniece Simmons was also in the library. "I didn't know what to do. All I could do was pray and keep praying," she said.

Wayne County Sheriff Larry Pierce said the shooting was not random, but he did not release a possible motive. College officials also said they do not know of a connection between Lane and Stancil beyond their relationship as student and employee.

Pierce said multiple law enforcement agencies were helping in the search for Stancil, who is believed to still be in North Carolina. Deputies waited outside Stancil's home, a trailer on Old Mount Olive Highway in Wayne County. His family runs a senior care business next door.

Family members at the home and neighbors declined to comment.

Classes were canceled for the rest of the day and will resume Tuesday. There will be extra security on campus to make sure students feel safe and counseling available to those who need it, college spokeswoman Tara Humphries said.

"We'd all like to express our sympathies to Ron Lane's family and to his colleagues," she said, adding that Lane worked at the school for 18 years.

Linda Bosseau, who works in the college cafeteria, said she saw Lane on Monday morning when he came to pick up breakfast, as he did every day.

"The last thing I said to him leaving out of there was, 'Have a great day,' you know, because he would tell us the same thing," she said.

Boisseau said she spent the next two hours locked in a storage room with 16 other people while the campus lockdown was underway.

"I'm very proud to say that as soon as the lockdown was announced, everyone went into full operation," she said. "It was very efficient, very effective."

Administrators have set aside an area at the center of campus for a memorial for Lane.