Rocky Mount, N.C. — The Florida man accused of shooting a Nash County deputy during a Thursday morning traffic stop on Interstate 95 was returning home after visiting his grandmother in New York, his father said Friday.

Jarred Javon Ford, who was wounded in a shootout with deputies, is now unresponsive and in critical condition in Vidant Medical Center in Greenville and faces numerous criminal charges.

Ford, 33, of St. Petersburg, Fla., was pulled over for speeding on I-95 north of Rocky Mount. Once outside of his car, he pulled a gun and started shooting at two deputies, according to Nash County Sheriff Keith Stone. One of them returned fire, hitting Ford several times, the sheriff said.

“It’s a crazy nightmare, but it’s real. It definitely feels like a nightmare," Jake Ford said of his son's shooting.

Jake Ford says he talked to his son just 15 minutes before he was pulled over. By the time he learned about the shooting, his son was being rushed into surgery.

“I am trying to figure out how something like this happened from a traffic stop. It just doesn’t make any sense," he said. "Whatever happened, it shouldn’t have led to that."

Jarred Ford retired from the Marines 10 years ago, but his father said he was forever changed by a six-month deployment in Iraq.

“He does have some mental issues as far as explosive behavior," Jake Ford said. “He gets real antsy at times. He gets real paranoid.”

Jarred Ford was diagnosed with intermittent explosive disorder, which the Mayo Clinic says involves "repeated, sudden episodes of impulsive, aggressive, violent behavior or angry verbal outbursts in which you react grossly out of proportion to the situation." But his father said he stopped taking his medication for it because it made him tired.

“Sometimes it’s hard to adjust to life back when you get out of the military because you’re on kill mode 24/7,” Jake Ford said.

Jarred Ford racked up several felony gun and drug charges between 2013 and 2015 and served 11 months in jail. He also has some aggravated assault convictions on what the Nash County sheriff said was an 11-page-long criminal record.

“It’s alarming to me that these types of individuals are out roaming the streets. It’s concerning," Stone said Thursday. “We need to look at our probation and parole and our courts and find out what we need to do to take the people who have records like this and put them somewhere to make it safe for people.”

Jake Ford said he tried to persuade his son to go to a Department of Veterans Affairs clinic to adjust his medication.

"He would go over backwards to help anybody," he said. "He does have a temper, but he is a good person."

Jarred Ford apologized for the shooting, his father said he learned after talking with Stone. 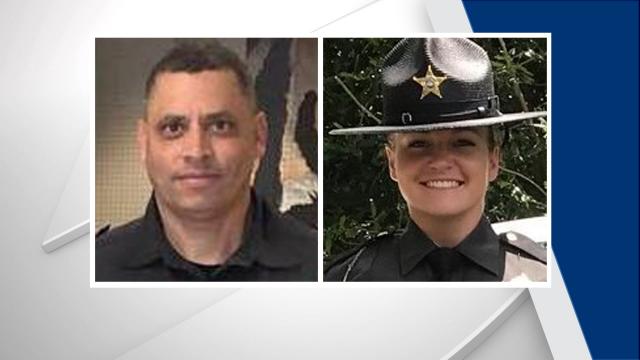 As he prays for his son’s recovery, Jake Ford says he’s thankful no lives were lost.

“Myself and my family, our hearts go out because we don’t want anyone to get hurt, period," he said.

Deputy William Toney was shot in both arms and his hip during the shootout. He was recovering at Vidant Medical Center and could be released early next week. Deputy Shelby Smith, who shot Jarred Ford, was treated for minor injuries at UNC Nash Health Care and released.