Woman shot man who was trying to rob her in downtown Raleigh, police say

Raleigh, N.C. — A robbery suspect was shot and wounded when his intended victim fought back and opened fire on him in downtown Raleigh, authorities said Friday.

Jonathan Tyrone Peace, 28, has been charged with common law robbery in connection with the incident Thursday in the 300 block of South Blount Street around 3 p.m., police said. He suffered a gunshot wound to the chest and was rushed for medical treatment to WakeMed. Information about his condition was pending.

Police said Morgen Matthews, 23, was walking on South Blount Street when Peace tried to rob her. She fired her weapon to stop him from attacking her, police said. She remained on the scene until police arrived, authorities said.

A man who said she was Matthews' boyfriend showed WRAL News a cell phone text from the woman as the event was unfolding. In it, she asks the man to come downtown because she had been attacked.

Initially, witnesses at the scene had told WRAL News that the man and woman had argued before the woman allegedly opened fire and shot the man.

Police on Friday released the 911 calls made by a caller who witnessed the entire incident. 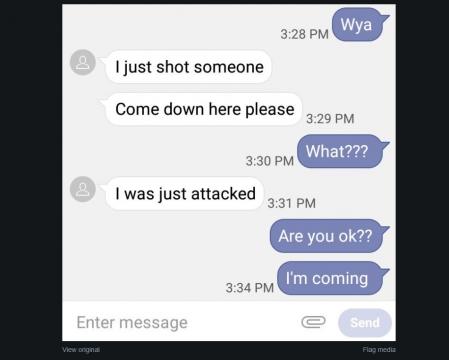 He said once the woman fired her gun, she dropped it, and someone inside a nearby restaurant retrieved it before turning it over to police. The caller said the woman was "violently accosted" before she fired the gun.

Several Raleigh police officers gathered at the scene and yellow crime scene tape was erected outside Growler USA, a popular microbrew pub, while police gathered clues. Patrons at the pub apparently came out and tried to aid the victim after the shooting occurred, witnesses said.

The incident occurred in a busy pedestrian area of downtown Raleigh.

Police closed the stretch of Blount Street between East Martin and East Davie streets while officers investigated the shooting. The street reopened about two hours after the shooting.

On Friday, visitors to the area expressed support for the would-be robbery victim.

"You need to protect yourself," one man said. "And if that's your avenue of doing it, then that's what you need to do."