Surviving Fire, Only to Die in a Torrent of Mud 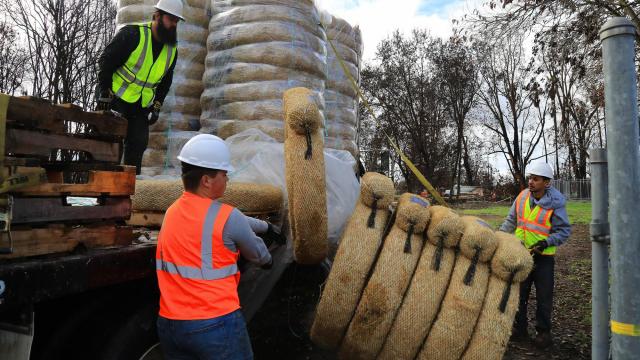 LOS ANGELES — For more than two weeks last month, Josie Gower shuffled between her friends’ spare bedrooms and couches while her own home in Montecito, California, was under evacuation orders because of the devastating Thomas Fire. So on Monday evening, she told her adult children she was grateful to sleep safely in her own two-story home.

But just before 3 a.m. Gower, 69, and her boyfriend heard what sounded like an explosion and they rushed downstairs.

When Gower opened the back door, she was swallowed by several feet of mud that overpowered her grip on the door frame and sucked her out of the house. Her boyfriend, Norm Borgatello, was swept away and pinned by a boulder against a fence. For more than six hours, he fought to keep himself alive. “Josie! Josie!” he would shout. But he never heard from her again.

Firefighters found her body nearly a mile away Tuesday afternoon. The only way they could identify her was by her fingerprints.

“It doesn’t make sense. I kept thinking the worst case would be a few inches of flooding,” her son, Hayden Gower, said. “I keep thinking over and over about what we could have done different. Why did she go down there then? What could have stopped her from dying this way? It’s too hard to imagine.”

The mudslides in Montecito wiped out entire blocks, killing at least 17 people with a brutal force that shocked residents and even emergency workers — in neighborhoods that survived fires just weeks ago. On Thursday, rescue teams continued to search for as many as 43 people, holding out hope that they could survive in the thick mud, as deep as 10 feet in some places.

The area was ravaged by the largest wildfire in California history last month and the mudslides were a direct result of the burned ground. Without any vegetation in the way, the hills were vulnerable to falling rock and debris. Parts of the hills still puffed with smoke from those fires as the rain came down Tuesday.

Four children were killed by the mud; the youngest victim was just 3 years old, according to a list issued by the Santa Barbara County Sheriff’s Office Thursday. Nearly all of those who died lived within a 2-mile radius in the flatlands of this small wealthy community just south of Santa Barbara. Most of the area was under voluntary evacuation orders.

Among those reportedly missing were the 25-year-old stepsister of 12-year-old twins, one who lived, one who died; a 28-year-old woman whose 10-year-old son died; and a teenage boy whose father died and 14-year-old sister was dramatically rescued Tuesday after firefighters slogged through the rubble for six hours.

On Wednesday, Hayden Gower went to his mother’s home, where he had grown up and she had lived for decades. The mud around San Ysidro Creek had spread nearly 1,000 feet, he said, and there were boulders the size of cars.

Last year, the front yard flooded when about 4 inches of rain came down in a day, Gower said. But Josie Gower assured him Monday that she had set out sandbags and was prepared. They had no idea that the mud would prove far more dangerous than the water.

In the past 48 hours, Hayden Gower and his sister, Breezy Haigh, have gone over and over what could have been done differently — alternating between blaming themselves and blaming county officials.

“The night before I told her, ‘Why don’t you come stay here?’ and now of course I wish I would have pushed her,” Haigh said Thursday.

Like her children, Josie Gower had only been back in her home for a few weeks. “I feel like the county let us down. During the fire, they took so much precaution. People didn’t take this seriously. If it had been a mandatory, she would still be here.”

Some blamed the desire to stay put on “evacuation fatigue,” because so many residents had only returned to their homes in the days before Christmas.

Officials from the Santa Barbara County Sheriff’s Office did not immediately respond to requests for comment. But they have said that they notified residents of the danger and decided which areas to evacuate based on input from weather, fire and flood experts.

Like several other victims in the neighborhood, Alice and James Mitchell chose to stay home because they were not under mandatory evacuation, said their daughter, Kelly Weimer. The couple, married more than 50 years, had left for the wildfire and were still packed in case the floods forced them to leave again.

So the Mitchells stayed in for dinner to celebrate James Mitchell’s 89th birthday and went to bed early. Their bodies were found Tuesday down the road from their house, which they had named Casa Contenta, the house of contentment. All that was left was its foundation.

“Nothing else is recognizable,” said Clay Weimer, the Mitchells’ son-in-law. Another home nearby had apparently slid down the hill. “The house next to them? Who knows where that house came from.” The white poodle Weimer gave her father for his birthday last year, Gigi, is still missing.

Another nearby neighbor, Rebecca Riskin, 61, was found by the freeway about a mile away from her home, said her ex-husband, Ralph Riskin. The couple’s 25-year-old daughter, Julia, was rescued by a Coast Guard helicopter from the roof of a cottage on Rebecca Riskin’s property, Ralph Riskin said.

“Robert, my son, called me and said that his sister Julia was OK,” said Riskin, before he was overcome with emotion. “But he said, and I’ll never forget it: ‘We can’t find Mom.'”

Many residents were still stunned at the sight of massive boulders around the town Thursday. A huge hole had taken the place of the living room in Josie Gower’s home.

Initially, Borgatello tried to get himself out of the mud, using his arms to pull his body up. But after he began shivering, he told Haigh, he realized he would be warmer if he stayed covered in the muck.

Borgatello was released from the hospital Wednesday, she said, and has repeatedly spoken with some confusion about the night.

“She looked at least 10 years younger than she was,” said Haigh, 35, adding that her mother swam at the local YMCA daily and kept her hair platinum blond. “She would have lived to be 100. I’m too young to have a dead mother.”

The child of Italian immigrants who settled in Santa Barbara, Josie Gower had spent her entire life in the area and delighted in having her three grandchildren, who called her Nonna, all nearby.

“She was the life of the party, every party,” Haigh said through tears. “For her, every party was the ‘party of the century.'”

Haigh and Hayden Gower had only begun to think about making plans for a funeral Thursday, anxious that they would not be able to find a place big enough for all the mourners in town.