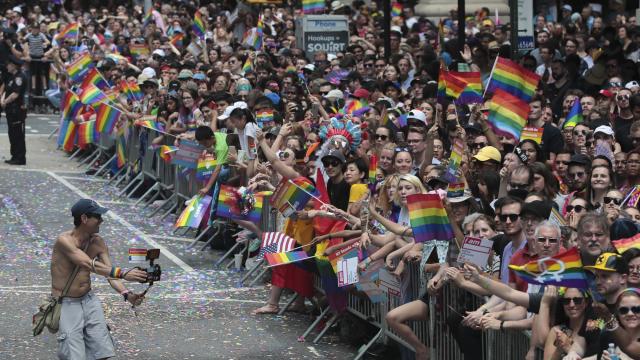 Support for lesbian, gay, bisexual and transgender rights has increased or remained steady among Mormons, Muslims, political independents, southerners, seniors and a number of other demographic groups in the United States since 2015, a new survey found. One notable outlier: young Republicans.

Between 2015 and 2018, support for laws aimed at protecting LGBT individuals from discrimination fell by nearly 10 percentage points among Republicans under the age of 30. This was one of the key findings from a survey of more than 40,000 Americans’ views on LGBT issues that the Public Religion Research Institute released Tuesday.

The majority of young Republicans surveyed — around 63 percent — continued to support such measures. But given that 74 percent were in favor in 2015, the shift was striking, said Robert P. Jones, chief executive of the institute, a Washington-based nonpartisan nonprofit.

“It was one of the largest and most significant drops that we saw,” Jones said.

Understanding this shift would require additional study, he said, but one hypothesis he offered was that the ranks of young Republicans are thinning, with more socially liberal individuals opting to identify as independent. “The Republican Party is becoming more ideologically pure,” he suggested.

The results for questions on nondiscrimination laws and refusal of service were based on about 40,000 interviews conducted in 2018 from March 14 to Dec. 16. Interviewers called 1,000 randomly selected people every week on landlines and cellphones and requested to speak with the youngest adult living in the household. The margin of error for these questions is plus or minus 0.5 percentage points.

Views on same-sex marriage were built on a subset of about 4,000 telephone interviews conducted from March 14-25, and from June 27 to July 8. The margin of error for that question is plus or minus 1.5 percentage points.

Here are three other findings from the survey.

Sixty-two percent of Americans continue to support same-sex marriage, the survey found. But among all racial and ethnic groups surveyed, individuals identifying as Asian-Pacific Islander Americans demonstrated the highest level of support for both same-sex marriage (75 percent) and for laws that would protect LGBT people from discrimination in jobs, public accommodations and housing (73 percent, 4 percentage points more than Americans overall).

These figures could be partly explained by another finding: Researchers spotted a strong correlation between participants’ educational level and support of LGBT rights. Overall, Asian-Pacific Islander Americans were far more likely than other Americans surveyed to hold either a four-year college degree or a postgraduate degree, Jones said.

Researchers had also found widespread support among religious groups in 2015 and 2017. (The 2016 survey did not investigate this matter.)

“What’s remarkable, I think, is how consistent these numbers are,” Jones said. “When you think of our polarized political environment, there are very few issues that you can say there’s bipartisan, cross-religious support for. This is an issue you can say that on.”

The survey also examined support for small businesses’ ability to refuse service based on the owners’ religious beliefs. Researchers identified a sharp split between men and women on this topic. Nearly half of men and less than 40 percent of women surveyed supported refusals of service on religious grounds.

— Seattle Had the Highest Percentage of LGBT People

A significant percentage of the individuals in the survey lived in 35 major metro areas.

Though there have been other methods used to identify the cities in the U.S. with high percentages of LGBT people, the survey data also offered indications. With 10 percent of survey participants identifying as LGBT, Seattle took first place. Portland, Oregon, and Austin, Texas, were tied for second, with 9 percent each.

Overall, about 5 percent of the 40,000 people surveyed identified as LGBT, which was consistent with previous years, according to Jones.