Support erodes for a ban on assault weapons 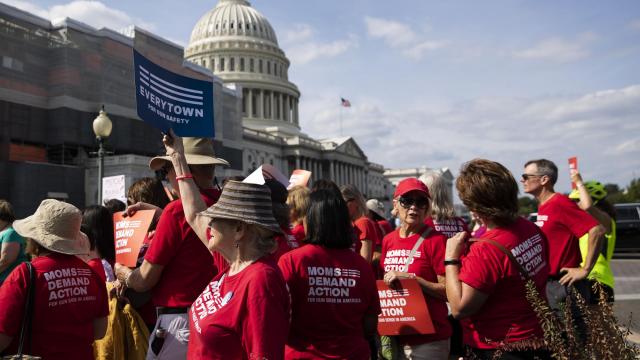 WASHINGTON — As Democrats make an aggressive push for new gun control legislation, they have made a calculated decision to stop short of pursuing their most ambitious goal: an assault weapons ban.

The overwhelming majority of House Democrats — 211, seven shy of the 218 needed for passage — are co-sponsoring legislation to ban military-style semi-automatic weapons, similar to the ban in effect from 1994 to 2004. But some centrist Democrats remain skittish about any proposal that keeps firearms from law-abiding citizens — a frequent charge against Democrats by Republicans and gun rights groups — making a ban politically risky for moderates in Trump-friendly districts. In the Senate, it draws less support.

The split reveals just how complicated gun politics remain inside the Democratic Party, even as mass shootings are terrorizing the nation and the Twitter hashtag #DoSomething has captured the mounting public demands for Congress to act.

On the presidential campaign trail, Democrats like former Vice President Joe Biden are rallying behind an assault weapons ban, and Beto O’Rourke, the former congressman from Texas, has gone so far as to call for a mandatory government program to buy back the weapons of war. But on Capitol Hill, House Speaker Nancy Pelosi and Sen. Chuck Schumer of New York, the Democratic leader, have barely breathed a word about reviving the ban.

Even Sen. Dianne Feinstein, D-Calif., who sponsored the 1994 assault weapons ban and is one of its most ardent defenders, did not raise the issue when she spoke about gun safety alongside Schumer on Tuesday afternoon. “We don’t have the votes to pass it,” she later explained.

“Let’s be honest,” said Rep. David Cicilline of Rhode Island, the sponsor of the current assault weapons measure. “Every other bill that we’ve done tries to keep guns out of the hands of people who shouldn’t have them. This is the one piece of legislation that keeps a particular weapon out of the hands of law-abiding citizens. A lot of people have enormous objections to that.”

Instead, as they wait for President Donald Trump to make an announcement — possibly as early as Thursday — about what kind of gun legislation he would support, Democrats are single-mindedly focused on hammering on Sen. Mitch McConnell of Kentucky, the majority leader, to take up a House-passed bill expanding background checks to cover sales at gun shows and online.

On Wednesday, three senators who have been in negotiations with the White House — Joe Manchin III, D-W.Va.; Christopher S. Murphy, D-Conn.; and Patrick J. Toomey, R-Pa. — said they had a wide-ranging 45-minute call with the president about gun measures.

Manchin and Toomey are the sponsors of a bipartisan background checks bill that is not quite as expansive as the one that passed the House, and they want Trump to sign on. McConnell has refused to take up any gun legislation unless the president agrees to sign it, and Trump has not made his intentions known.

“We’re looking at background checks, and we’re looking at putting everything together in a unified way so that we can have something that’s meaningful,” Trump told reporters after his call with the senators. “We’ll see what happens.”

The 1994 law, which passed as part of a broader crime bill championed by Biden, then a senator, banned the sale of 19 specific weapons that have the features of guns used by the military, including semi-automatic rifles and certain types of shotguns and handguns.

It also outlawed magazines that could hold more than 10 rounds of ammunition, while allowing people who already had such weapons to keep them. But it had a sunset provision, and Congress refused to renew it when it expired in 2004, in part because Democrats were nervous that it could cost them reelection.

The politics have shifted since then, especially after a summer of deadly mass shootings.

Some Democrats in surprising corners of the country have also embraced a ban, even though the political reality is that Trump would never sign such a measure. Two moderate Democrats who beat Republicans for House seats last year — Reps. Mikie Sherrill of New Jersey and Jason Crow of Colorado — spoke out last month in favor of a ban, with an opinion article in USA Today. Both are military veterans, and Crow ran on an aggressive platform of combating gun violence.

Even some Republicans have signed on to the idea. Among them is Rep. Michael R. Turner, R-Ohio, whose district includes Dayton, where a gunman killed nine people outside a bar last month. Rep. Brian Mast, R-Fla., where a 2018 mass shooting at Marjory Stoneman Douglas High School in Parkland galvanized a youth movement for gun safety, also supports a ban.

But for centrists like Reps. Elissa Slotkin of Michigan and Kendra Horn of Oklahoma — both of whom also flipped seats in districts Trump won — supporting an assault weapons ban could be politically toxic.

Rep. Henry Cuellar, D-Texas, who enjoys the backing of the National Rifle Association and is facing a primary challenge from the left, does not support a ban.

“I am for reasonable gun reform,” Cuellar said in a recent interview. “But I’m not going to take guns away from people like they want to do.”

The House Judiciary Committee is planning a hearing on the idea of assault weapons bans later this month but is not expected to focus on a specific bill.

Instead, House Democrats are moving forward in the coming weeks on three measures approved Tuesday by the House Judiciary Committee: a “red flag” law, aimed at making it easier for law enforcement to remove guns from those deemed dangerous by a judge; a bill barring people convicted of hate crimes from buying firearms; and a measure banning magazines that hold 10 or more rounds of ammunition.