Robeson County, N.C. — A statement released from the superintendent of Robeson County Schools states that, while not confirmed, the body found Tuesday near Lumberton is believed to be missing Hania Aguilar.

The FBI said the body was located Tuesday afternoon as authorities searched for 13-year-old Aguilar, who has been missing for three weeks.

The body was located in an area off Wire Grass Road in Robeson County at about 4:45 p.m., just over 10 miles from Hania's home. While the body has not been positively identified, authorities said Aguilar’s family has been notified out of an abundance of caution.

In a written statement, the FBI said the body was located as agents and officers with the Lumberton Police Department, Robeson County Sheriff's Office and SBI followed leads related to the search for Aguilar. 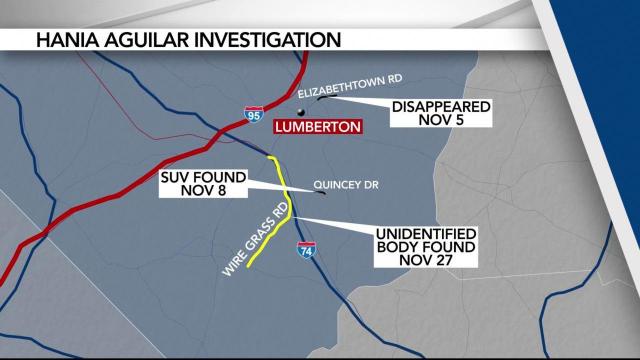 A statement released Tuesday by the superintendent of Robeson County Schools read, "The body is believed to be Hania, but the identity has not yet been confirmed. This is an unfortunate end to an extensive search and we are committed to supporting all students and staff as they cope with the heartbreaking tragedy."

The superintendent also started that, upon receiving full confirmation, the district will provide increased support staff for all students and staff at Lumberton Junior High School, where Hania was a student.

Community members gathered Wednesday to support the Aguilar family and others who loved Hania.

"The first thing that comes to mind is that she had to have been watched or someone knew her routine," said Robert Norris of Garland. "There’s a lot of possibilities...but nobody really knows until she is found and everything can be investigated. You hear all these stories on TV, like in California and New York, and never think it could be right in your own backyard. It makes you get a sense of security and awareness about you that you never had before.”

Officials have previously requested surveillance videos from Wire Grass Road, as well as several nearby areas, in connection with the search.

Authorities said the body has been sent to the state crime lab in Raleigh for identification and an autopsy.

“Please continue to pray for Hania, her family and each other as the investigation continues to find out who kidnapped Hania and hold them responsible,” the FBI said in a statement.

Community not losing hope in search for Hania Aguilar

"It hurts my heart. It hurts my heart real bad," said Britton Lowry of Lumberton. I’m a father. I don’t know what I would do if it was my kid. My heart goes out for them.”

Hania Aguilar was abducted on Nov. 5 by a man dressed in black and wearing a yellow bandana while she was standing outside her family's home in the Rosewood Mobile Home Park, at 3525 E. Elizabethtown Road.

Hania had just started her aunt’s green SUV when a man jumped in to abduct her. The vehicle was located a few days later in the woods off Quincey Drive, which is about 10 miles from where the teenager was kidnapped.

Over the weekend, authorities said the person who kidnapped Aguilar may have attempted to get rid of a distinctive pair of sneakers the girl was wearing.

There is surveillance video of a man walking on Lambeth Street before turning north on NC Highway 41 towards the mobile home park minutes before the 13-year-old was kidnapped. FBI officials would like to find that man or anyone who recognizes him from the video, although they have not said he is a suspect.