Sunrun Gives Tesla a Fight in the Home Solar Business 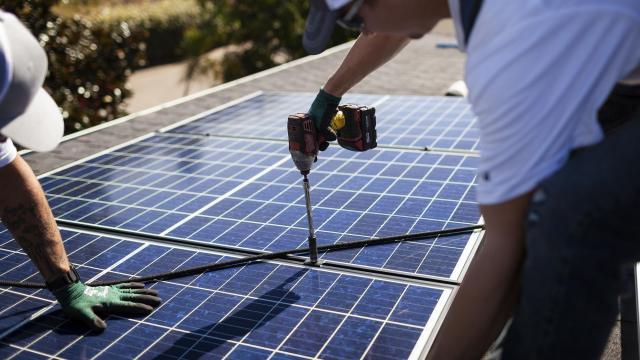 LOS ANGELES — Just four years after its founding in 2006, SolarCity had emerged as the nation’s leading rooftop solar power company. The company’s founders, with the help of their billionaire cousin, Elon Musk, set out to be the vanguard of an age in which consumers weaned themselves from dependence on utilities for their electricity.

After piling on debt in pursuit of fast growth, the business was absorbed into Musk’s Tesla empire two years ago. And now rivals are chipping away at its primacy in installation and innovation.

In the short term, the biggest competition is coming from Sunrun, an installer of residential solar panels and energy storage that is capturing a growing amount of what had been SolarCity’s signature market.

“It is all but guaranteed that Sunrun will emerge as the top residential solar installer in the U.S.,” said Allison Mond, a senior analyst at Wood Mackenzie, which provides consulting on various issues including energy and renewables. “Tesla’s residential solar business is in rapid decline as the company has cut many sales channels.”

Wood Mackenzie, which tracks and supplies solar data for the Solar Energy Industries Association, says Tesla accounts for 9.3 percent of residential solar installations nationwide this year, followed by Sunrun at 9.0 percent, in a fragmented industry. In 2015, SolarCity had one-third of the market while Sunrun had 5 percent.

Since the acquisition of SolarCity, Tesla has worked to present itself as a one-stop shop for a homeowner’s needs — an electric car in the garage, solar panels on the roof, and a battery called the Powerwall storing energy to help power both the car and the home. Tesla also makes a battery system it sells commercially and to utilities, called the Powerpack. The Powerpack stores energy from the electric grid as well as power collected from solar arrays larger than systems designed for home use.

Sunrun says it has already surpassed Tesla, if the installations it finances through third-party contractors are counted. That could bring Sunrun’s market share for residential installations to as much as 15 percent.

Sunrun, founded in 2007 and based in San Francisco, says it has sold more than $3 billion in installed solar systems. Lynn Jurich, Sunrun’s co-founder and chief executive, said her company recently expanded into seven new markets and now has a presence in 22 states, the District of Columbia and Puerto Rico.

Part of Sunrun’s strategy has been to stay focused on financing and installing solar panels and batteries rather than producing those products itself. Jurich said, “Manufacturing, that’s not our core competency.”

New opportunities for both companies are opening up, especially in California, which is already the nation’s leader in solar installations and is adding new mandates and incentives.

Under a policy approved in May, all new-home construction in California must include solar power by Jan. 1, 2020. And Gov. Jerry Brown recently signed a bill that allocates $800 million to a program providing rebates for home energy-storage systems. Florida also has new policies supporting residential solar power.

Analysts say prices for comparable residential solar systems at Sunrun and Tesla are about the same. But as they move to take advantage of the growing appeal of home solar power, the companies are pursuing divergent paths.

Visitors to Tesla’s showroom in Burbank, California, will find a Model X and Model S parked on the showroom floor while a Powerwall and a single solar panel are displayed on a wall. A video shows how the products can be integrated.

The approach of using Tesla stores replaced a long-established sales strategy that focused on a partnership with Home Depot in which Tesla representatives sold solar panels at the hardware giant’s retail outlets. Tesla says selling its products under one roof “will save money and enable our colleagues to work together more effectively and efficiently.”

But the partnership approach seems to suit Sunrun, which lacks its own showrooms and has struck a relationship with another giant retailer, Costco. That is where Ed Hanlon, of Carlsbad, California, recently encountered a Sunrun sales representative. After researching the company, Hanlon, 72, decided to buy a 7.5-kilowatt solar power system, including a battery, that workers began installing this month.

“We live in California, so sunshine is a given,” said Hanlon, a retired Marine. But what pushed him to go solar was frustration with the rate increases by his power company, San Diego Gas and Electric, during the last couple of years.

Neither Sunrun nor Tesla makes its own solar panels. Tesla has a deal with Panasonic to make panels at Tesla’s Gigafactory 2 in Buffalo, New York, but uses other suppliers as well. Tesla manufactures all of its other products, including parts for installing the systems.

The foreign origin of many panels has been a handicap for the industry since President Donald Trump imposed tariffs on their import this year. Sunrun says that the tariffs have not slowed its business, while Tesla declined to comment about the effect.

Sunrun’s revenue in 2017 was $533 million, up from $477 million in 2016. Tesla’s revenue from electricity generation and storage last year was $1.1 billion, but that includes some commercial and utility-scale products.

Even with the traction that Sunrun has gotten, Tesla says it is intent on pushing ideas that are untested or have yet to gain widespread adoption or success.

And it is building out its leadership team with the recent arrival of Sanjay Shah, who helped with growth and development at Dell and Amazon, as the senior vice president of Tesla Energy.

“Competition is always healthy,” Shah said in an interview, but he said Tesla and Sunrun were fundamentally different.

“Instead of focusing on the competition and the markets, we are focusing on where the world is going,” he said. “The growth in terms of market share is just a matter of time. Our energy business will continue to grow, and it will be as big as our auto business.”

But Vikram Aggarwal, co-founder and chief executive of EnergySage, a solar comparison-shopping service, said Tesla’s self-contained approach had made it challenging for Musk to execute his vision.

“They wanted to be a fully vertically integrated product, manufacturing and installation company,” Aggarwal said. “That is a very, very expensive strategy to implement where you have so many components. For one company to be really good at all of it is very difficult.”

Shah described the changes as strategic moves to improve efficiency. Customers, he said, will ultimately visit and keep returning to Tesla stores because of the experience they will find in search of products to power their lives.

“When customers think renewable energy, they should think about electric vehicles, solar and battery — not just solar and a battery,” he said. While Tesla announced a 9 percent job reduction across all its businesses in June, it has been hiring more installers and electricians to ramp up its solar power and energy storage business.

The crown jewel of Tesla’s solar products was supposed to be glass solar shingles that would be more visually appealing than the rectangular panels that sit on rooftops. Many people find boxy solar panels unattractive on roofs with ceramic barrel tiles, or simply don’t like puncturing holes in their shingles to install panels.

Musk promised to deliver the shingles at a price comparable to replacing a normal roof. But like other Tesla products, the shingles have been delayed, which the company attributed to their complexity. It said last week that it expected to ramp up production in the first half of next year.

Musk’s cousin Lyndon Rive, a co-founder and former chief executive of SolarCity, says he is optimistic about Tesla’s long-term leadership in the solar and storage business. “Tesla is going to continue innovating and creating services,” he said.

Rive, who created SolarCity with his brother Peter in 2006, joined Tesla after his company was acquired. But the two left after a few months for undisclosed reasons.

Lyndon Rive acknowledged the delivery struggles that Tesla often experiences with its products. But he said the company would ultimately prevail in the solar and storage market.

“Yes, they do have the ramp-up challenges,” he said. “But they solve them. They always do.”