I could tell my kids that the peach is native to China. That it came to these parts of the United States about 300 years ago. That California is the top producer of the juicy fruit here, but North Carolina isn't too far behind at No. 9. That N.C. farmers grow about 35 million pounds of peaches each year.

I could dazzle them with more fun facts culled from this page on the North Carolina Cooperative Extension Service's website, but I'm certain they could care less.

For them, fresh slices or the whole fruit is all they need. And if juice starts running down their arms after the first or second bite, it's even better.

It's the middle of peach season here in North Carolina, a period that runs from late May to the middle of September, according to Janice Holder, who has been selling peaches at the State Farmers' Market for decades.

My family has shopped regularly at the market since my older daughter was born eight years ago. And we go to Holder's stand at the far end of the long open-air market building right next to where other vendors sell baked goods and cut flowers for all of our fresh fruit needs. She sells strawberries in the spring for Dean Farms and apples for Perry Lowe Orchards (which will start appearing this weekend). 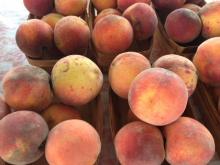 But for most of the summer, she focuses on peaches for Pee Dee Orchards, based in the Anson County town of Lilesville in the south central part of the state. (Interesting side note: Much of the movie "The Color Purple" was filmed there).

We've gotten peaches elsewhere, but we've never been disappointed when we buy from Holder. That's one reason why we go back. The other reason is Holder and her crew, who offer free peach samples with a smile and remember us when we return.

"We have great customers, like you," Holder told me the other day. "You get to know faces and if you don't see them, you wonder if there's something wrong." 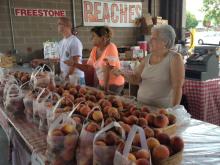 When I pick up a bag, I usually have plans to make a pie or cobbler with them, but by the time I get around to it a day or two later, the peaches are nearly gone. Really, you don't need to add sugar and butter to these beauties. They're delicious just on their own.

The variety of peach that Holder sells changes throughout the season, starting with Rich May, Derby and Red Haven varieties, and then moving on to the freestone fruits, including the popular Winblo and, now, Contender, known for its sweet, yellow flesh. She'll move on to selling Elberta and Sweet Sue in the next couple of weeks.

No matter. We'll be back. They're all peachy to us.