When I'm at an ice cream shop, I rarely choose something other than mint chocolate chip.

It's my very favorite, a clear winner, as far as I'm considered, among ice cream flavors. You can't beat that mint and chocolate combination. Even as a kid, I opted for the cone of green ice cream flecked with chocolate bits.

So, in my many decades of eating mint chocolate chip ice cream of all varieties, the cone I had at Lumpy's Ice Cream in Wake Forest represented a first: Actual pieces of fresh mint in the ice cream.

With the first lick, I knew this was something different. There wasn't that fake mint taste. This was actual fresh mint. Like what I have in my garden. Like what I might enjoy in a favorite adult drink recently discovered at Fox's Liquor Bar (but that's another post for another day). 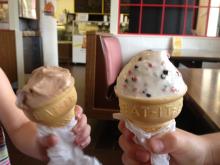 I took a close look at my cone and that's when I saw it: Actual, real mint in my mint chocolate chip ice cream cone.

My first taste of Lumpy's was last summer at a food truck rodeo at North Hills in Raleigh. Mint chocolate chip wasn't on the menu, but peach ice cream was. My girls and I each ordered a cone. The flavor was so popular that day that we bought the last of it, something my girls still remember more than a year later. It was delicious. 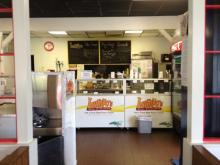 Ever since, I've had a trip up to the Lumpy's Wake Forest shop on my to-do list. We finally made it a couple of weeks ago.

Buck Buchanan, a local dad, dreamed up Lumpy's after moving to Raleigh from Vermont, according to Lumpy's website. The idea came about after he made some ice cream from local hormone-free milk and fresh fruits for his own kids.

Fast forward some years and now Lumpy's has the Wake Forest storefront, is the official ice cream of the Carolina RailHawks, is found at Whole Foods, Southern Season and elsewhere, and continues to grow. What you'll find at Lumpy's is fresh and creative ice cream without any preservatives, additives or synthetic hormones.

When we were at the downtown Wake Forest store, flavors included I'm Just Mad About Saffron, Tammy's Sweet Taters, White Street Stout, and Farrah's Fabulous Fig. My younger daughter devoured a cone of Kenny's Kickin Chocolate. My older one enjoyed the chocolate and raspberry pieces in Ramona's Rocking Raspberry. I'm not sure I ever even got a chance to taste my husband's dreamcicle ice cream. 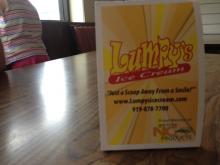 I was tempted by the fig flavor and sampled it. It was so good, but habit pushed me back toward that mint chocolate or, rather, Madd Max Mint Chip. So glad it did.

This concludes our Summer Treats series. For past posts, click here.