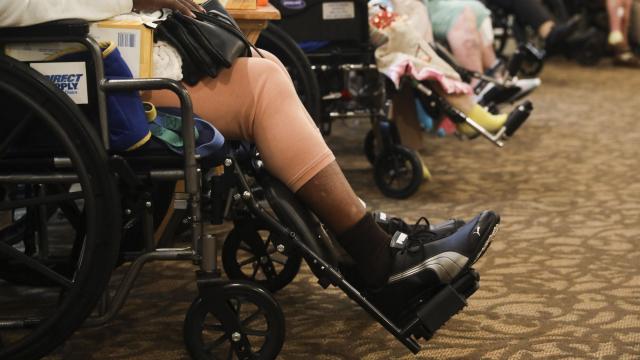 WASHINGTON — The expanding gap between rich and poor is not only widening the gulf in incomes and wealth in America. It is helping the rich lead longer lives, while cutting short the lives of those who are struggling, according to a study released this week by the Government Accountability Office.

“It’s not only that rich people are living longer but some people’s life expectancy is actually shrinking compared to their parents, for some groups of people,” said Kathleen Romig, a senior policy analyst at the liberal Center on Budget and Policy Priorities.

Income inequality has roiled American society and politics for years, animating the rise of Barack Obama out of the collapse of the financial system in 2008, energizing right-wing populism and the emergence of nationalist leaders like Donald Trump, and pushing the Democratic Party leftward. Sen. Bernie Sanders, a self-described democratic socialist who is seeking the Democratic presidential nomination, commissioned the report from the Government Accountability Office, Congress’ independent watchdog, and seized on its findings.

“Poverty is a life-threatening issue for millions of people in this country, and this report confirms it,” Sanders said in a statement.

The Census Bureau reported Tuesday that the poverty rate declined last year to 11.8%, the lowest level since 2001. But median household income was $63,200 in 2018, essentially unchanged from a year earlier, and income gains slowed last year from the increases posted in 2015 and 2016.

The accountability office’s study looked more broadly at the relationship between income, wealth and longevity — and how wealth and income are distributed among older Americans over time. It found that while more older Americans were living into their 70s and 80s, not everyone was living longer. Greater levels of income and wealth were associated with greater longevity.

The report looked at the population of Americans born between 1931 and 1941. Just 52% of that group who had incomes in the bottom 20% of midcareer earnings were alive in 2014, compared with nearly 75% of people in the top 20%. The study found similar results when zeroing in on accumulated wealth instead of annual income.

The accountability office found that demographic characteristics were also associated with longevity. Women in the group tended to live longer than men: Almost 70% of women were living in 2014, compared with almost 60% of men.

But, Romig noted, “the poorest 40% of women actually have lower life expectancies than their mothers did.”

Advocates have long pointed to racism in the health care system, for example, as a culprit for the high black maternal mortality rate.

This is in part because people with a college education generally have higher incomes and wealth accumulation than those who did not attend college.

“We don’t want groups of people moving backward,” Romig said, adding: “We don’t just want some people to be healthier and longer lived; we want everyone to equally share in these gains.”

The study notes that a significant portion of the original group was alive in 2014. “Taken all together,” it said, “individuals may live a long time, even individuals with factors associated with lower longevity, such as low income or education.”

But even though Americans may live a long time, they are struggling. The portion of Americans aged 55 or older who are still working increased from 30% in 1989 to 40% in 2018, in part because stagnating wages are hindering savings and wealth accumulation.

When older Americans do finally retire, most are depending on Social Security and other safety-net programs. This is alarming because Social Security is “facing financial difficulties that, if not addressed, will affect its long-term stability,” the study said.

“If no changes are made, current projections indicate that by 2034, the retirement program trust fund will only be sufficient to pay 77% of scheduled benefits,” the study said.

That finding could help conservatives resurrect efforts to overhaul Social Security — and cut the growth of benefits for some. Rachel Greszler, a research fellow at the conservative Heritage Foundation, said Social Security needed “immediate reforms.” She suggested that policymakers “bring benefits up and maintain them for lower-income individuals” while “reducing benefits for upper-income earners who don’t need it as much and have retirement accounts they can rely on.”

Presidential candidates, including Sanders, are not likely to embrace that conclusion, but they will press the issue of growing inequality.

“We must put an end to the obscene income and wealth inequality in our country, and ensure living wages, quality health care and retirement security for our seniors as human rights,” Sanders said.

“If we do not urgently act to solve the economic distress of millions of Americans,” he added, “a whole generation will be condemned to early death.”