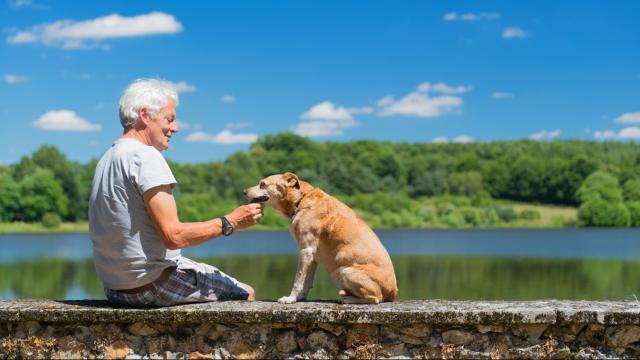 Loneliness is not just an emotional problem for many older Americans, it also causes health effects equal to smoking 15 cigarettes a day, according to AARP research.

The risks of hypertension, heart disease, strokes and other health conditions rise significantly. Almost half of all seniors now report regular feelings of loneliness, and many find that pets relieve these feelings.

"The ill-effects of loneliness on health and well-being are well established," said Dr. Dave Comer, the managing physician assistant at Prime MD. "If companionship, whether human or otherwise, can ease these negative emotions, it can go a long way to improving the overall quality of life."

Horse and Buddy Therapeutic is a facility in New Hill that specializes in developing relationships between at-risk populations and animals. Holly Confroy, the program director for the equine-based therapy facility, described the impact these visits have.

"Horses help physically because it activates their muscles. This alone can improve the mood of many participants," Confroy suggested. "But also the companionship -- each horse has its own personality."

Confroy pointed out the horses are chosen for their calm demeanors, and people trust them because of their "kind eyes."

"Like with dogs, you can feel their warmth and personalities," she said.

Confroy witnesses many seniors visit alone or with groups, and said they often arrive looking lonely and sad, but they leave with a smile.

One 83-year-old woman rides every week and has developed a relationship with specific animals. The woman said it makes her feel young, re-energized and independent.

Having a pet in the living space with a senior brings this companionship to another level of closeness. There may be difficulties with caring for a pet as one ages, but when possible, there seems to be benefits.

University of Rochester psychiatrists conducted a study of 830 primary care patients to determine the effect of pet ownership.

All participants were over 60 and either lived alone or with a pet. Those with pets reported being lonely 36 percent less than those who were alone without a pet.

This confirmed earlier research conducted in the 1990s and summarized by Sarah Burke for U.S. News and World Report. In her article, In the Presence of Animals, Burke noted that a look at 25 different studies of pets in retirement homes found those with pets smiled more and were more alert.

Retirement communities across the country took note of this and other reports on the benefits of keeping pets. These facilities now allow for pets to be kept by residents.

"In our community, we see a dramatic effect from pet companionship," said Victoria Sosa, withom Cambridge Village of Apex. "Having another living being there for friendship goes a long way to feeling connected and cared for."

Sosa noted there has been a noticeable increase in residents keeping pets in their community in recent years.