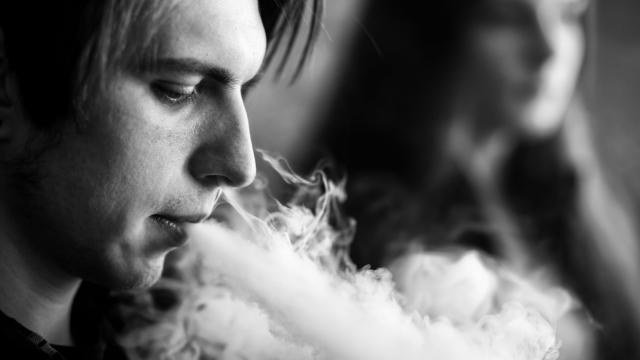 Roughly a decade ago, e-cigarettes made their debut onto the market. Today, vaping has taken off — it's now a billion dollar industry. As of October 2018, 10.8 million American adults are vaping, according to a study published by the American College of Physicians.

Even more alarming is the vaping rate among teens, which has continued to rise sharply this year. Vaping prevalence has more than doubled in eighth, 10th and 12th graders since 2017, according to the National Institute on Drug Abuse.

The appeal of e-cigarettes among adolescents may be due to how they're marketed. Colorful advertising, pictures of cookies and dessert treats on the bottles, and sweet and fruity flavors aim for youth.

Vaping has brought smoking back in vogue at an affordable price, and teens view it through the same lens that the public saw smoking decades ago: a little bit rebellious, feminine and sexy, masculine and tough.

"E-cigarette company Juul took the marketing playbook from big tobacco — they pushed this idea that you could make a 'healthy cigarette' and targeted teens specifically," said attorney Ben Whitley, a partner at Whitley Law Firm in Raleigh.

Viewing cigarettes through rose-colored glasses came to a halt in the late '90s when the tobacco industry was held accountable for misleading advertising practices. Health policies and nationwide campaigns to discourage smoking began to shift the public perception.

According to a patent filed in 1963 for inhaling appliances shaped like cigars, cigarettes or pipes, e-cigarettes were originally developed to help cigarette smokers quit their habit by allowing them to satisfy nicotine cravings without inhaling burning tobacco, but the data regarding vaping's impact on cessation is inconclusive. What was originally promoted as an off ramp for adult smokers has become a dangerous on ramp for teens; the cost of a "cure" for adults is exposing another generation to the same problem.

Perhaps the most well-known e-cigarette manufacturer, Juul, burst onto the scene with products containing 5.9 percent nicotine by volume, a huge jump from the 1 to 2 percent market average at the time. What followed was a "nicotine arms race," a metaphor coined by Robert Jackler, founder of the Stanford Research Into the Impact of Tobacco Advertising. Now, more than 70 e-cigarette brands sell high-nicotine products (categorized as 5 percent or more nicotine by volume).

"I believe more and more information will come out about the knowledge Juul had on the possible adverse effects of e-cigarettes and that there will be justice for those who felt like they were misinformed about the contents of their products," Whitley added.

The bright colors and fun advertising leveraged by e-cigarette companies is a dangerous disguise, Jackler says, for a product that threatens to addict a generation and reverse a decade of public health efforts. Teenagers who vape are much more likely to graduate to traditional cigarettes and face an increased risk for subsequent addictions like opiates or cocaine, Jackler says.

"For a teen, becoming nicotine-addicted greatly increases the likelihood that they will graduate to traditional, combustible cigarettes. Importantly, nicotine addiction during adolescence increases the vulnerability to subsequent addictions, like opioids or cocaine," Jackler said. "For most users of illicit drugs, their initial addiction was to nicotine."

More daunting is the growing body of research that reveals vaping isn't just a gateway to harmful drugs — it can be deadly on it's own. The Centers for Disease Control and Prevention and state agencies have reported 805 lung injury cases and 16 deaths linked to vaping, and the Mayo Clinic discovered lung damage resemblant of a poisonous chemical burn in biopsies from 17 patients, two of which who had died. The rise in vaping-related illnesses, such as unusual lung fluid, inflammation or pneumonias, hospitalizations, and deaths has turned a critical eye toward the industry from the public, journalists and policy-makers.

As the curtain is pulled back on these devices, lawmakers and regulatory organizations are cracking down. Juul was issued two warning letters from the Food and Drug Administration for violating advertising regulations, and the CDC and some state health officials recommend people give up vaping of any type. But for families who've been affected, the path may seem less clear.

"If you or a loved one has suffered as the result of using Juul products without knowing critical information about their contents and side effects due to false advertising, you could be entitled to compensation and should reach out to an injury attorney who can help," Whitely advised.

Most Americans are unaware they may be eligible to pursue financial compensation for harm brought to them or their children by these e-cigarette companies, which have, in many cases, failed to publish clear, law-abiding warnings on their products about their dangers.