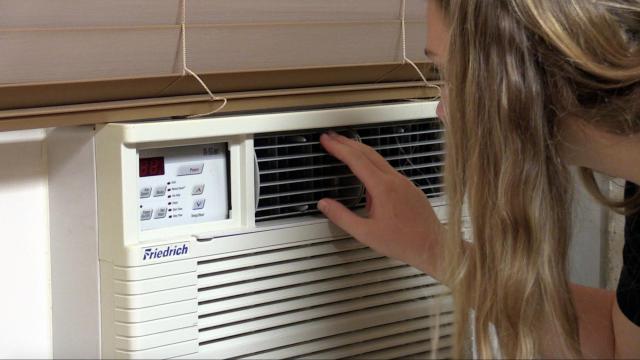 Chapel Hill, N.C. — Emili Potts first noticed the mold outside of Craige dorm on the University of North Carolina at Chapel Hill campus, trailing the wall below her leaky air conditioning unit.

When the junior began having trouble breathing, she looked inside her AC unit and saw mold growing on the vents.

She went to the doctor because her throat hurt and she couldn’t stop coughing. The doctor told her she had bacterial pneumonia, most likely linked to the AC unit. She was hospitalized for two days in February, missing classes and two exams.

She also incurred about $3,000 in medical bills after insurance.

“I’m a very outgoing person,” said Potts, who is a resident adviser in Craige, “and I like to talk to my residents and make sure I have time for them and all of that. But being sick all the time, it also makes me very tired, so I spend a lot of time just like being exhausted and don’t have the energy to do my job effectively.”

While, more than 1,000 UNC-Chapel Hill students will be moved out of off-campus housing during mold removal at Granville Towers, a privately managed complex, hundreds of students who live on campus and face similar problems are getting little relief.

Potts has had pneumonia two more times since February, most recently last month. She reported her concerns to the university, but she’s not been satisfied by the temporary solutions such as AC cleanings and refills for her antibiotics. It’s taken a toll on her grades and her physical and mental health.

She keeps an inhaler with her, something she’s never needed before.

“The health and safety of our students, faculty, staff and visitors is the university’s highest priority, and we take all reports of potential mold seriously,” Allan Blattner, executive director of Carolina Housing, said in an email. “If a student has filed a Fix-My-Room request but they feel their issues are not being resolved to their satisfaction, I encourage them to speak to their RA (resident adviser) so that the situation can be elevated.”

Potts said her residents have complained about mold. She tells them to fill out “Fix-My-Room” requests to Carolina Housing because there’s nothing else she can do. 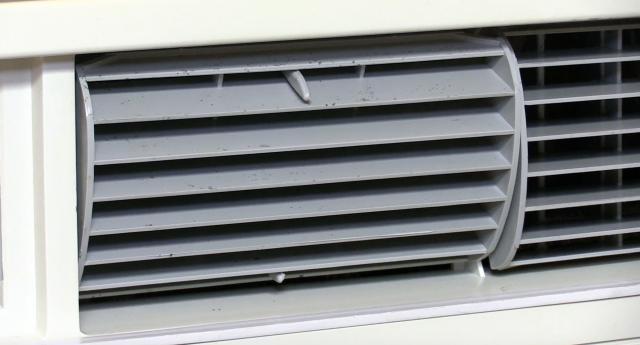 Blattner said that, historically, less than 20 percent of these work orders are actually found to be mold.

“Most of the misidentification occurs when students look inside the window AC unit and they perceive the coils to be moldy is actually the coils getting darker naturally over time as they age,” he said.

Mold is a greater concern in the Southeast because of the weather, Blattner said.

“Given a source of moisture, microbial growth (commonly referred to as mold) can grow just about anywhere within 24-48 hours,” the Carolina Housing website says. “These conditions can be created by food, organic materials containing moisture, wet towels, water intrusion, or spills which are not cleaned up immediately.”

When Potts addressed her concerns with maintenance workers in August and asked what action will be taken to eliminate mold, she said they refused to call it mold and said it’s a “biological growth.”

“Then they said basically that all of the buildings on campus and any building you go will have mold, so there’s just nothing you can do about it,” Potts said.

“If an observation of mold is reported,” Blattner said, “a same-day visual inspection occurs, and then Housing/Facilities works with Environment, Health and Safety to clean the mold, resolve any underlying issues and provide recommendations to prevent any reoccurrence. Facilities Services also performs regularly scheduled preventive maintenance and building inspections, including preventive maintenance of building HVAC, which is crucial for mold prevention.”

Using research from the Department of Housing and Residential Education, the University’s Master Plan suggests UNC-Chapel Hill needs to renovate, redevelop and build new dorms in the near future. The plan was approved in June, and Carolina Housing is working on a timeline for the project, Blattner said.

Six other buildings’ AC systems have been replaced since summer 2015, totaling $13.5 million. The university plans to replace Joyner Hall’s system next spring.

Students pay almost $7,000 annually to live in a double-occupancy dorm room. About 19 percent of Carolina Housing’s 2019-20 budget will go to maintenance, housekeeping and grounds, and 22 percent will go to capital improvements.

As an employee of the university, Potts’ room and board price is cheaper than other students, and she keeps the job because she relies on it for financial reasons. But she said it’s getting to the point where her dad wants her to quit and focus on her health.

“As a resident adviser, obviously I’m not paying as much to live here as other residents, but it frustrates me for them who are paying a pretty hefty room and board price in my opinion to live in a place where it’s making them sick and they can’t do anything about it,” she said.

Just a seven-minute walk from campus, Granville Towers is dealing with the same issues.

It opened in 1964 and was bought by The UNC Foundation, the university fundraising unit, in 2009. It houses approximately 1,300 students.

While Granville is not managed by Carolina Housing or UNC Facilities Services, it partners with the university to maintain residence life programs.

In an Oct. 11 email to residents, Granville staff provided a timeline for mold clean-up.

The tentative schedule suggests cleaning will be completed in the West, East and South Towers in waves by Nov. 3. High Efficiency Particulate Air filters were placed in every room awaiting cleaning to remove any particles in the air, including mold spores.

While a student’s room is cleaned, he or she will be placed in nearby hotels for two nights.

Blattner said Granville is managed by a private company. “Because of this, the work being done has no impact on the speed of the Carolina Housing facilities responses.”

“I got moved into a room with more mold, and they get The Carolina Inn and hotels?” senior Larissa Burke said. “Most of the on-campus residents affected by mold weren’t even as ‘lucky’ as me to be moved into a different room. It’s extremely unfair.” 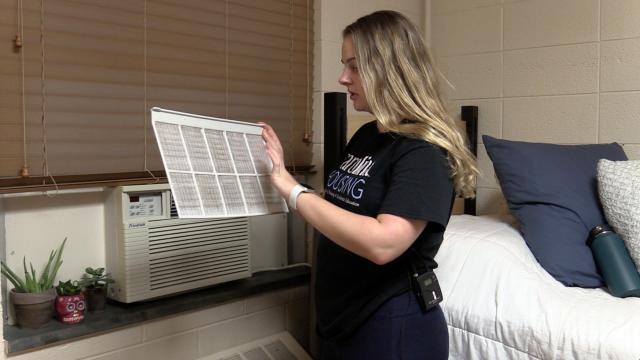 Burke was also a resident adviser in Craige last year. She noticed the mold lining her cabinets and desk as soon as she moved in.

Things escalated when she returned from fall break. The mold lined every piece of fabric she owned, covering her futon and clothes. She washed everything she could and refused to live in the same room.

Carolina Housing moved her to a different room in the same building, but it wasn’t any better. She constantly felt like she had a cold, sniffling and coughing.

She continued to fill out Fix-My-Room requests, and the university responded with temporary cleanings. Even when they told her it was clean, she would find more mold.

Burke bought cleaning supplies and deep cleaned the room herself. Her dad bought her a $200 industrial humidifier.

She also lost more than $500 in damaged property, including her futon, suitcase, backpack, boots and other clothing. She sent the detailed list to Carolina Housing and was told she would be reimbursed for her financial loss. She never was.

“It’s frustrating to know that your employers don’t really care enough to do something. It’s where we’re living,” Burke said. “I am paying – RAs do have to pay some money – but like it’s still, it’s where you live. It’s supposed to be a safe place.”

Mold spores shot out of her unit, and Burke hit a breaking point. She asked housing to replace her unit entirely. They did, and her problems were resolved immediately.

Burke got out of Craige this year. She’s currently an adviser in Ram Village Apartments and said she has had no issues with air quality.

Potts wasn’t as lucky. She faced her problems later in the year and had already selected Craige as her preferred work location.

“It’s very frustrating because they preach this whole how they care about us, and clearly, if so many people are having to deal with this,” Burke said, “then how much do they really care?”

This story was produced the UNC-Chapel Hill’s Media Hub.

At Media Hub, under the direction of John H. Stembler Jr. Distinguished Professor C.A. Tuggle, students are hand-picked from various concentrations in the UNC School of Media and Journalism work together to find, produce and market stories with state, regional, and at times, national appeal.