Garner, N.C. — Garner police arrested a 17-year-old student of Garner Magnet High School Wednesday night and charged him with making an online threat that prompted elevated security at the school.

Police say Judah Alexander Dennis, of 108 Bayberry Lane, made posts to Snapchat that showed a gun, used threatening language and made reference to the high school and students there. 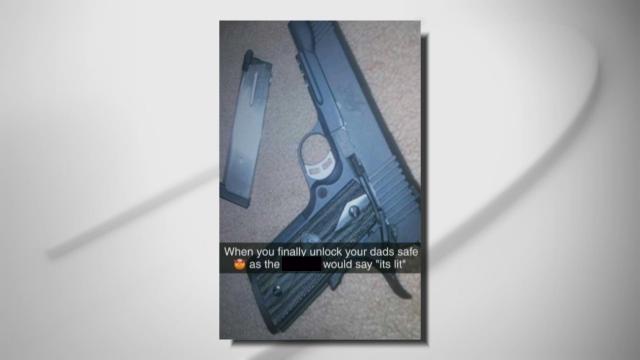 Those posts were shared with school officials and law enforcement, and the school promised to add security officers for classes on Thursday.

Dennis faces a single charge of making a false report concerning mass violence on educational property, a felony. He was found at his home shortly before midnight and taken into police custody.

Dennis appeared in court Thursday afternoon, where a judge said he could face up to 39 months in prison if he is convicted. He was given $5,000 bond and released to the custody of a parent. He is scheduled to appear in court again Sept. 21.

"He has never been in trouble. He has been in school and he has done very well in his school," she said. "What he thought was a joke now has the ability to stay as a stigma on his life. So I just want to admonish, young people and parents, please make sure of what your children are doing on the internet."

"Parents and guardians, please know and share with your students that we take all these threats seriously and investigate fully. Not only are consequences delivered by the schools, but where feasible law enforcement, at our urging, will seek to prosecute," the statement said. "In our school community we do not consider social media threats humorous, cute or insignificant."

Hugh Harris with the North Carolina Department of Justice said there are a number of things to look out for when monitoring your child's online behavior.

"It could cause cyber-bullying or sexting. Some of these things are very serious about the internet and one of the things we know as adults is anything you put on the internet, whether it be your language or photos or anything, it stays on the internet forever," Harris said.