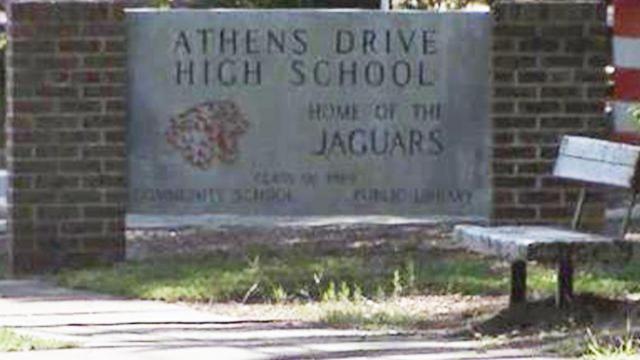 Raleigh, N.C. — A student at Athens Drive High School in Raleigh is facing charges Thursday after, police say, he brought a handgun to school.

Demetrius Donte Brown, 17, was charged with carrying a concealed weapon, possession of a gun on educational property, possession of a stolen firearm, resisting, delaying or obstructing a law enforcement officer and possession with intent to sell or deliver marijuana.

School officials and the Raleigh Police Department's school resource officer found the gun while conducting a follow-up investigation into a disturbance in the cafeteria Thursday morning, a police spokesman said.

There was no indication that Brown displayed the gun at any point or that it was involved in the cafeteria incident.

Principal William Crockett said in an email to parents that officials found the gun during an investigation into a theft and that there was never a direct threat of harm to anyone.

"Keeping our school safe remains a top priority, and we encourage students to immediately report any safety concerns," Crockett said. "This letter is to inform you that we will continue to take every measure to ensure the safety of our students."

A spokesman for the Wake County Public School System could not provide any other details about the incident.

The police investigation is ongoing.