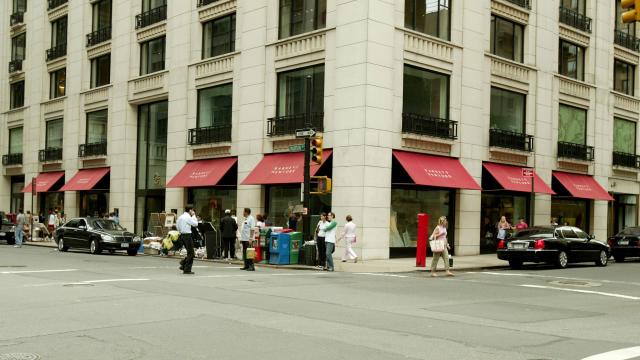 CNN — Barneys reportedly may become the latest brick-and-mortar retailer to file for bankruptcy.

Reuters, citing unnamed sources, reported Saturday that the company "has not yet made a final decision on whether or not to seek bankruptcy protection, and is weighing other possible solutions for addressing high rents that are straining its business."

The sources told Reuters that filing for bankruptcy protection could help alleviate the pressure of expensive leases.

In a statement to CNN Business, the luxury department store, formally called Barneys New York, said it is "actively evaluating opportunities to strengthen our balance sheet and ensure the sustainable, long-term growth and success of our business." The company did not say whether those options included bankruptcy.

Barney's has several locations in the United States, but its headquarters and flagship store line the area around New York's Fifth Avenue, which for months has been emptied of prominent luxury retailers as they flee high rents and shifting consumer tastes.

High-end brands used their stores on the upscale New York blocks to attract wealthy residents and tourists. Each of the companies leaving Midtown faces its own set of challenges. But in general, the value of cavernous flagship stores is coming under pressure as more customers shop online and on their phones.

Barneys also has several locations in Los Angeles, including in the upscale Rodeo Drive area, where rents have also reportedly climbed.

As Barney's evaluates its footprint, the company said it will also open new storefronts in New Jersey's American Dream retail complex and in Miami Beach. It also has a new store in Las Vegas and it recently announced the launch of a "cannabis lifestyle" shop in Beverly Hills called "The High End."

"We continue to evolve our strategy and business model for the benefit of all of our stakeholders through our forward-thinking and uniquely modern approach," the company said in a statement.