Jennifer Cuthbertson was only 42 years old when she suffered a stroke in 2011. She was at home preparing to emcee an event for a friend when she felt strange. "I just felt odd and weird and off," said Cuthbertson.

Her family noticed she seemed confused. She put oatmeal in the microwave but forgot to add water. The babysitter asked her a question. "I could not think of what to say back to her," Cuthbertson said.

A bit agitated, she asked her husband for a caffeinated drink. The next thing he knew, she was on the floor. "And he said, ‘Are you okay?’ And I said, ‘I need to think. I need that thing, that thing.’ And he said, ‘If you say one more time I need the thing, I’m calling EMS,’" recalled Cuthbertson. 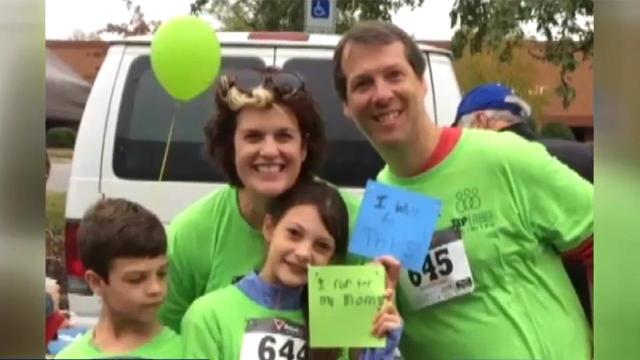 Her husband did call EMS, and it may have saved her life.

The American Stroke Association uses the acronym F-A-S-T to help people recognize the symptoms of stroke:

Minutes lost can be brain loss. That can lead to permanent disability or even death.

Cuthbertson learned that she had been born with a PFO or "Patent foramen ovale." That’s a hole between the two upper chambers of the heart. The hole is present in every baby before they are born and then typically closes after birth.

Cuthbertson was not aware that hers had not closed. She was at greater risk of a blood clot crossing through the hole between the two chambers and blocking blood to a part of the brain.

Ten years after her stroke, Cuthbertson periodically has trouble getting a thought out. After a pause, searching for the next word, she smiled and explained, "The hesitation and the stuttering, that’s all part of the aphasia."

Cuthbertson keeps a Facebook photo of the day she was released from WakeMed. Roses were on the table next to her empty hospital bed. The caption read, "See that bed? That’s me not in it! I’m going home today!!"

Looking back, she realized that, like many women, she tended to put her own health concerns last. "It’s very hard for them to stop and listen to their bodies and say, ‘Something is not right,’" she said.

Heart disease is still the number one killer of women. Eighty percent of cardiac events, including stroke, can be prevented through modest changes to diet and lifestyle.