The North Carolina Department of Transportation closed the following streets in the area: 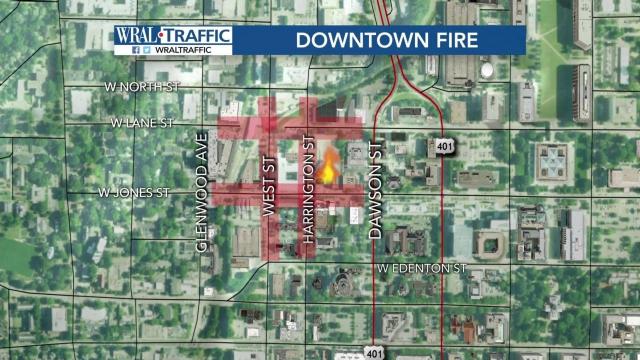 The fire damaged 10 buildings, including Doug Sutton's insurance business, at 333 W. Jones St. He said he learned of the fire on the late news Thursday.

"We could see the fire on top of the roof, and they reported later the firemen were putting that out," Sutton said Friday. "It's amazing what they saved."

"It was hard to look at that (fire) and think that it was real and that it was right next to our office building," said Kevin Leonard, executive director of the Association of County Commissioners. "Several offices are burned out. It looks like the roof has some significant fire damage."

The association also had offices at the nearby Quorum Center high rise, which was heavily damaged by the fire. Leonard said the group will have to find new space for the foreseeable future.

Paul Meyer, executive director of the League of Municipalities, said in a statement that the organization's data servers are handled off site by a vendor. So, while the fire has displaced employees, the organization's business operations will continue without interruption.

Although the youth center will remain closed for some time, church officials said they plan to hold Sunday services.

Three state government buildings downtown were closed Friday, including the main offices of the Department of Environmental Quality, because they had no electricity in the wake of the fire, and employees were told to work from home. The Commissioner of Banks office at 316 W. Edenton St. was also closed because of its proximity to the fire scene.

Three other government buildings also lost power after the fire but didn't close.

Windows in one state government building, the Old Health Building at 216 W. Jones St., were damaged by the fire and were repaired Friday, officials said.

Other downtown businesses were hurt financially by the fire.

Tobacco Road Sports Cafe, at 505 W. Jones St., was evacuated at about 10:30 p.m. Thursday. Owner Alex Amra said the bar would likely have stayed open – and busy – until about 1 a.m. Friday for the opening night of the NCAA basketball tournament.

"My brother called me in the middle of the night in a panic because it really looked like it was all going to come this way. There was no stopping it," Amra said. "I'm just thankful the fire department was able to do what they did because it was a fireball."

On Friday, the combination of the basketball tournament and St. Patrick's Day would have generated huge business, he said. Still, he acknowledged the business he's losing pales in comparison to what others have lost because of the fire.

"I know it's not busy and the people aren't here because a lot of people live in that building," he said, pointing to The Link, an apartment building heavily damaged by the fire. "They're family. They're coming in, and you know them all. So, it's kind of hard not seeing them here today because you know they are trying to find a place to live, a place to stay, trying to get their stuff together."