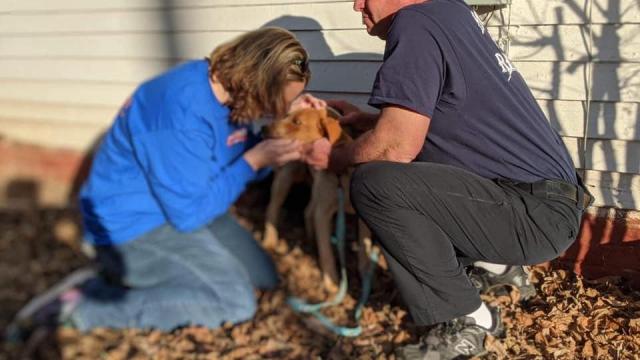 Roxboro, N.C. — When a stray dog crawled under a Roxboro home to deliver a litter of brand new puppies, rescuers were there to save them all.

The beagle mix, now named "Mama Ruby," and her pups were rescued Saturday from the tiny crawl space of a Roxboro home.

The Roxboro Fire Department and Vintage Racers for Rescues worked together to get the family out.

"This morning in Roxboro was nothing short of amazing," Vintage Racers posted on their Facebook page. "When the fire department tells you they’ve fallen in love with a beautiful stray hound and need help because she had puppies, you go!"

Firefighters worked tirelessly to pull Mama Ruby and all five of her pups out from under the home. Photos posted on Facebook show the rescuers crawling under the home coaxing the scared animals out.

After the rescue, the firefighters stopped by a local pet store to buy food to donate to Ruby.

According to Robyn Handy, who founded Rescues for Racers with her husband Dave, Ruby had been wandering the area as a stray for two years.

"She is loved and known by many but was too shy and skittish to be caught," Handy said. "When she became pregnant, firefighters were determined to find where she delivered her puppies and keep them all safe."

The mother and pups are currently in the care of a foster family.

According to the rescue, the pups are doing well, and Ruby is slowly learning to trust humans.