Raleigh, N.C. — From long lines to empty shelves, people in the Triangle are racing to the stores for food and paper goods.

Sky 5 flew over Costco in Raleigh on Friday. The parking lots was full with lots of shoppers looking for cleaning supplies, toilet paper, hand sanitizer and other items to help them fight the coronavirus outbreak. We made several stops at big box stores and grocery stores to see how well stocked they were, or were not.

In many cases, the shelves were empty.

"The store is empty," said Michael Welke. "The freezer sections are gone, like they don’t have anything in the store almost."

From the fruit to the soup and the milk, shelves are empty around many Triangle stores. 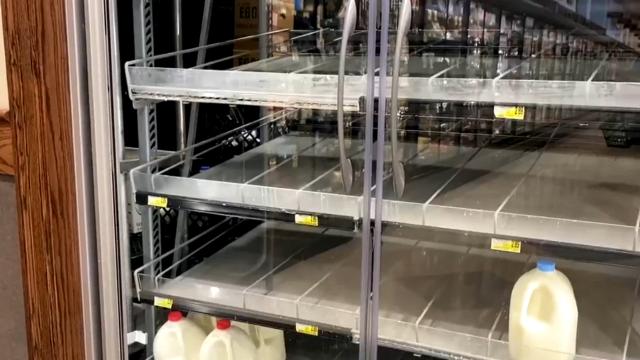 Everybody is buying," Welke said. "A lot of food, just in case they’re stuck inside for the next 30 days or something like that."

Trader Joe's employees were busy restocking shelves with canned goods. There wasn’t much fruit to pick through at a Harris Teeter location we stopped at.

"Actually, none of the stuff I came for, one thing was there," Welke said. "The Trader Joe’s cookies, that was it, everything else was gone.

John Faulhaber stocked up at Costco.

"Ziplock bags, so we can put all the meat in stuff that we bought," Faulhaber said. "Just in case we get quarantined at home, they tell you we can’t go out."

WRAL's Mark Boyle showed lines wrapping around the retail giant store earlier Friday in a Facebook live, but Faulhaber said it died down later in the day.

"About 10 minutes, the checkout wasn't bad either," Faulhaber said.

But like most stores, they didn’t have one item almost everyone is looking for.

"There's no toilet paper in the building to be had," Faulhaber said. "Costco's out.

There was no toilet paper in all the stores we checked. Some stores were also running low or completely out of bread, eggs and water bottles. Stores were in stock with baby food.